When snowfall gets serious and rooftop accumulation gets concerning, a roof rake can ensure that your roofs stay clear and prevent collapse. 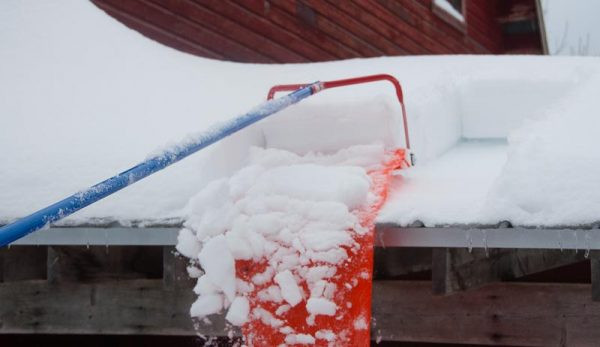 Winter has been crazy up here in the north woods of Wisconsin.

The polar vortex in January that brought sustained subzero temperatures was bad enough. But itâ€™s been followed by a snowy February that saw 35 inches fall in the first two weeks of the month. Yikes!

Suffice it to say, weâ€™ve spent a lot of time this month digging out the farm. This includes not only doorways, walkways and driveways, but also the roofs of buildings.

Rooftop accumulation has been extensive (which, fortunately, doesnâ€™t happen every year). So to reduce the risk of roofs collapsing, weâ€™ve spent time knocking the snow to the ground.

Which is easier said than done. My simplistic apple-picker-snow-remover technique is obviously insufficient for jobs of this magnitude.

Therefore, I turned my attention this year to a different tool that has proven quite helpful.

Truthfully, itâ€™s not that different than an apple picker. It comprises primarily lightweight tubes that snap together to provide a handle of variable length. It can be a few feet long, or you can stretch it out over approximately 20 feet.

The top of the unit features two wheels on either side of a rotating rod, from which a long piece of plastic dangles. Here’s one on the Ace Hardware website called an Avalanche Roof Rake:

Itâ€™s a strange-looking tool at first glance, but it works better than I would have thought.

By placing the unit at the base of the roofâ€”right where the snow begins, and with the wheels touching the roofâ€”you can roll it up through the snow. This effectively guides the plastic sheet under the snow and slices it off the roof.

Then, by lifting a little and pulling the whole tool back down, the snow will slide right down the plastic and fall to the ground.

Now, depending on the specifics of a given roof (including the amount of snow thereâ€”which is presumably a lot), you probably wonâ€™t be able to remove all the snow.

And despite the fact that the tool is relatively lightweight, maneuvering it up and down the roof is a tiring task best done in bits and pieces so you donâ€™t exhaust yourself.

You might want to find a helper so you can work in shifts. Or work as a team when extending the tool out as long as it goes for reaching the farthest reaches of a roof.

But despite a bit of initial skepticism, Iâ€™m impressed with how the roof rake performs. I removed a significant amount of snow from two roofs today, and I didnâ€™t have to touch a ladder.

If the snow keeps falling (and more is forecast), Iâ€™ll be ready for it.

A few safety tips to keep in mind:

Are you concerned about the snow on your roofs this winter? Consider giving a tool such as this a try.