Top 5 Worms In Chickens & What You Should Do

Chickens get a wide variety of worms, which are both common and typically no cause for alarm. Here are the top five and what you need to do. 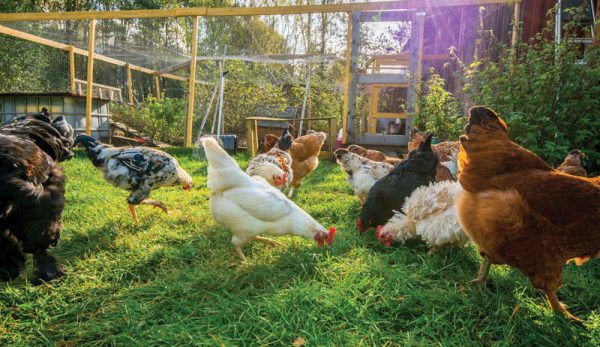 A column about worms and your chickens may give the heebie-jeebies, but remember that with knowledge comes power. Learning the basics of worms, how to prevent them in your flock and how to treat them will help your chickens live a healthy life.┬Ā

Worms are basically parasites that live in your chickenŌĆÖs digestive system. They typically donŌĆÖt kill your chickens (any parasite wants to keep the host alive). But moderate infections can result in emaciated chickens and birds that show signs of diarrhea.┬Ā

In addition, severe cases can cause impaired feed efficiency and production. In extreme cases (i.e., heavy parasitic loads and co-infections), some worms can cause relatively high mortality rates. To that point, when owners see worms in their chickensŌĆÖ poop, they commonly ask, ŌĆ£Should we worm our chickens?ŌĆØ┬Ā

Like most things in medicine, I would answer, ŌĆ£It depends.ŌĆØ

ItŌĆÖs definitely not normal when chickens have a lot of worms. However, ŌĆ£normalŌĆØ loads of most worms are relatively harmless. In fact, having some worms helps generate a robust immune response.

This means treatment needs to be based on clinical signs consistent with worm infestation and, in some cases, a clinical diagnosis. A measured approach helps reduce the potential for resistance to dewormers and helps avoid loss of eggs associated with post-treatment withdrawal times.

This article will provide some basic information on common worms, how to prevent them and when to treat.┬Ā

As noted, worms are very common. And at some point, most chicken owners have to deal with them. However, all worms arenŌĆÖt created equal, making identification an important step when assessing the significance when finding worms.

While many different types of worms can parasitize chickens, for this article weŌĆÖll focus on the five most common types.┬Ā

The following is a brief description of the most common worms mentioned above and in ŌĆ£Common Internal Parasites,ŌĆØ below.┬Ā

Roundworms, or ascarids, are very common in backyard poultry. Adult worms grow to about 1 1Ōüä2 to 3 inches long by approximately 1Ōüä8 of an inch wide. Extensive infection may reduce egg production.

Death may occur due to intestinal obstruction in immunosuppressed birds or those with a co-infection of a second disease.┬Ā

You’ll find capillary worms, or capillaria, in the crop or esophagus and capillaria eggs in the lining of the intestines. They may cause thickening or inflammation of the crop tissue and focal lesions in the intestinal tract.

Severe infestation may lead to mortality.┬Ā

Cecal worms are found in the ceca of chickens, in the lower gastrointestinal tract. The worms themselves don’t pose a major threat. But they can carry the agent that causes blackhead disease, or histomoniasis. Histomoniasis affects chickens but is primarily associated with mortality in turkeys.

Consequently, you shouldn’t raise turkeys in the same environment as chickens. Chickens can carry the relatively common cecal worms.┬Ā

Tapeworms, or cestodes, are flattened, ribbon-shaped worms composed of numerous segments or divisions that live primarily in the intestinal tract. Infections result in emaciation in mature flocks, especially if severe infestation is exacerbated by malnutrition or immunosuppression.

Depending on the species, tapeworms can grow more than five inches.┬Ā

Gapeworms, or Syngamus, are found in the trachea and respiratory tree. These worms are also called ŌĆ£forked wormsŌĆØ because the male and female worms are always locked in copulation and form a ŌĆ£Y.ŌĆØ

The term ŌĆ£gapewormŌĆØ comes from a heavily-infected birdŌĆÖs tendency to gasp or ŌĆ£gape.ŌĆØ Worms can grow up to 1 inch and block the trachea, causing suffocation. Chicks suffer the most danger because of their relatively small trachea.┬Ā

You can diagnose the worms listed previously in a variety of ways. With a high load, you’ll see roundworms and tapeworms with the naked eye in feces. You can take a fresh fecal sample to your veterinarian to identify worms present in the GI tract. Ask for a fecal flotation test or a fresh smear of feces.

Postmortem examination of mucosal scrapings of affected tissue (respiratory or intestinal) can also help in gauging the health status of the remainder of your flock.┬Ā

Chickens can pick up worms and their eggs from the feces of other chickens or birdsŌĆöincluding wild birds. Often insects act as the intermediate host by carrying worm eggs, which then get deposited in the chicken after they ingest the insect.

In general, you’ll find worms in the respiratory or intestinal tract.

Prevention of disease is always more desirable than treatment. To do this, we need to understand the environmental conditions worms thrive in along with how they reproduce and infect their host.┬Ā

While worms and their eggs will always be present at some level within the poultry environment, you can mitigate their ability to cause disease with proper husbandry and management of your flock and their environment. In general, control measures should focus on sanitation, interruption of the life cycle and the strategic use of efficacious dewormers.┬Ā

For example, help control tapeworms by reducing the flies that act as intermediate hosts. And control flies through proper manure management and overall general cleanliness.┬Ā

If at all possible, after a heavy infection, move your flock to land that has not been occupied by chickens. Any area that has manure on it consistently will eventually have a high load of bacteria, viruses and parasites.┬Ā

Practice good biosecurity. Worm eggs infect new facilities through contaminated equipment. Make sure to not share equipment with other flocks before properly disinfecting it.

In addition, controlling worms presents a challenge in backyard flocks due to the common presence of mixed-aged flocks. In mixed-aged flocks, older, apparently healthy chickens can shed eggs in their feces and subsequently infect the younger chicks.

If you do have mixed-aged flocks, consider treating or testing the older birds before introducing chicks.┬Ā

When & How to Treat

In general, only eggs and poop should come out of the vent. Seeing worms likely indicates an unhealthy worm burden. If one or two of your chickens carry high worm burdens, treat the entire flock.

While other medications are effective against internal parasites, Piperazine is the only FDA-approved treatment for internal parasite in meat- and egg-producing birds. Resistance does occur, though. So itŌĆÖs important to use only when necessary, such as after you see or diagnose worms or have seen clinical signs.┬Ā

Other drugs listed in ŌĆ£Common Internal Parasites ŌĆØ are considered extra-label. Their use requires a prescription from a licensed veterinarian. Piperzine is added to drinking water. Take special care┬Ā to use dechlorinated water (the case with any medication added to water.)

For any drug, refer to the Food Animal Residue Avoidance Databank with respect to the most up-to-date information on withdrawal times for eggs and meat, which may be different.┬Ā

Read more: Should you give your chickens wet food?

While Piperazine has a relatively wide spectrum of activity, it isnŌĆÖt effective against all of the different worms weŌĆÖve discussed. Another concern: Different worms can develop resistance to Piperazine and other treatments over time.

Consequently, limit use of Piperzine and other dewormers to treating specific problems. Scheduled ŌĆ£wormingŌĆØ may not be advisable. Before you worm, ask yourself, ŌĆ£Why?ŌĆØ┬Ā

Good management will go a long way toward protecting your flock from worms and other diseases. If your flock is showing clinical signs of worm infestation and youŌĆÖre able to identify the type(s) of worms present, the treatments mentioned in this column should be considered.┬Ā

Here are five common internal parasites backyard chicken-keeper might find in their flocks, the symptoms caused and what treatment to follow.┬Ā

Note: Piperazine is the only FDA-approved treatment for internal parasites in meat- and egg-producing birds. Other drugs listed are considered extra-label, and their use requires a prescription from a licensed veterinarian.

Are You at Risk?

However, several other diseases that chickens carry are zoonotic, including the bacteria campylobacter along with salmonella. Therefore, always wash your hands after handling your chickens.

This article originally appeared in the March/April 2022 issue of┬ĀChickens┬Āmagazine.

Maurice Pitesky is a faculty member at University of California School of Veterinary Medicine-Cooperative Extension with an appointment in poultry health and food safety epidemiology. Dr. Pitesky earned his B.S. in biology from UCLA, and his DVM and MPVM from UC Davis. Pitesky is also boarded in Preventative Veterinary Medicine (DACVPM). PiteskyŌĆÖs research interests are focused in mapping of avian diseases, food safety epidemiology and in gaining a better understanding of small scale poultry production with respect to environmental sustainability, poultry health and food safety.