A old, French breed, the heavy Toulouse is characterized by a large pendulous dewlap. 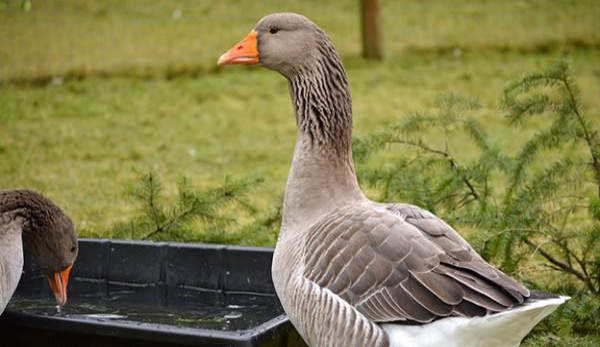 Use: Toulouse is a heavy breed of goose used for meat production and exhibition.

History: Toulouse is a very old French breed, developed as a farmyard bird in Southern France and selected for foie gras production in certain regions. They were admitted into the first American Standard of Perfection in 1874. Gray geese commonly sold by hatcheries are called Toulouse but often do not have the massive appearance or dewlap of Standard-bred Toulouse geese.

Conformation: Massive, deep-bodied geese with a large pendulous dewlap are characteristic of this breed. They lack the knob of the African and are recognized in Gray and Buff varieties. Known for large square, broad bodies, they have a deep keel which nearly touches the ground. They should carry themselves nearly horizontal. Like the other heavy breeds of geese they are typically docile.

Special Considerations/Notes: The American Livestock Breeds Conservancy has divided Toulouse into three sub-groupsã Production, Standard Dewlap and Exhibition. The Production type includes smaller gray geese commonly sold by hatcheries. They typically lack the dewlap and massiveness of traditional Toulouse. They are good layers and actively forage. The Standard Dewlap and Exhibition types are the massive birds described above with the Exhibition type having more exaggerated features.