Tractor Attachments: How to Use a Plow & Disc

The plow and disc are the preferred field-treatment method of many organic farmers. Here are the basics on how they work. 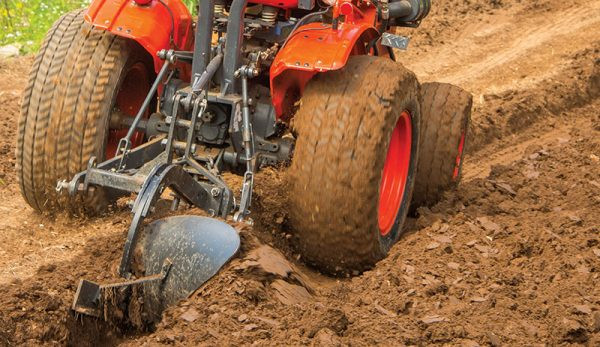 Plow attachments have fallen out of favor in many circles recently, and with good reasons: Tillage exposes loose soil to erosion, can negatively affect soil health and requires the use of costly fuel. With the emergence of no-till techniques, many farmers have cast aside plows in favor of alternative field treatments.

However, no-till is not perfect. The required equipment can represent an undue expense for small-scale farmers, and no-till field treatments typically use glysophate (read: Roundup) to kill grass and cover crops before drilling seeds into the soil. For many organic and small farmers, the tried-and-true plow attachment is still the best way to go.

Put simply, a plow, or â€śtiller,â€ť is a machine that churns soil loose. These attachments use teethlike tines (one, two or three or more) to pierce the soil, then pull clods loose to breakup topsoil, expose underlying dirt to oxygen, bury weed seeds and make the soil more accessible for seeds and crop roots.

Such attachments have been around since the early days of machine-aided agriculture, but there are still some lessons to be learned for effective use.

â€śNever plow wet soil,â€ť says Jack Kuhn, of Kuhndog Ridge Farm in Frankfort, Kentucky. â€śNot only does it make a mess, but it will cause serious compaction problems. And donâ€™t overplowâ€”one pass will doâ€”or plow too deep, burying enriched topsoil and diluting with subsoil.â€ť

Kuhn has some advice for setting up plows, too.

â€śMost plows turn soil to the right, looking forward from the rear of the tractor,â€ť he says. â€śSet the tractor on level ground with the plow attached, then adjust the top bar out so the plow has a slight pitch forward toward the ground.â€ť

He advises that too much pitch will cause the attachment to dive, while too little can create ineffectiveness.

A tillerâ€™s side-to-side angle also needs to be set to account for the height difference created when a tractorâ€™s right-side tires drop into a rowâ€™s plow rut.

â€śThe left side needs to be 6 to 8 inches lower than the right,â€ť Kuhn says, resulting in â€śthe two or more plow blades being level and equally biting into the soil at the same depth.â€ť

After plowing, a field needs to be worked with a cutting disk to break up soil chunks.

â€śMost discs have an adjustment for how aggressively you want them to cut by changing the angle of the gangs,â€ť Kuhn says. â€śI have found the middle setting to work the best for most applications, resulting in a more uniform, finished surface.â€ť He also advises that a field may need multiple passes with a disc to cut clods, level disturbed soil and prepare a smooth, clean surface. â€śThere is nothing like the sight of a perfectly turning row of soil and the smell of fresh worked earth,â€ť Kuhn says.