Tractor Won’t Start? It Might Be Your Battery Terminals

If your tractor refuses to start, check the battery—the battery terminals and/or battery cables might be worn out or corroded. 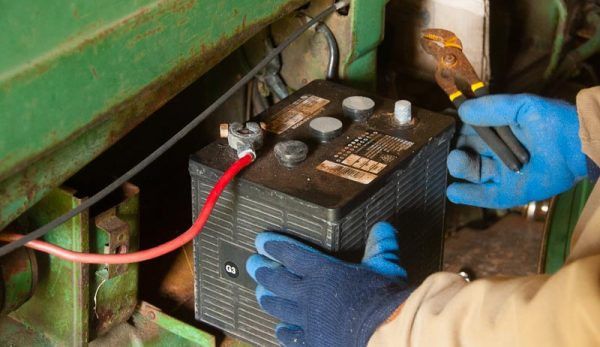 During the spring, while working on annual machinery maintenance, I was surprised to discover that trusty old “Little Mo”—my John Deere Model 40—wasn’t in the mood to start when asked.

This was noteworthy because Little Mo, despite her age, has never had any meaningful issues with starting. She’ll fire up in the dead of winter if necessary, as my brother humorously discovered on one particularly cold afternoon.

Yet here I was, hoping to move a hay rake, and Little Mo was stubbornly refusing to show signs of life.

It wasn’t as though the starter was spinning and the engine was refusing to catch. Turning the ignition produced no response whatsoever.

Keeping an old tractor going is just a case of maintenance (and appreciation).

This was encouraging in one respect. Presumably, there wasn’t anything wrong with the engine (always a relief), and the issue lay instead with the electrical system. Which, in Little Mo’s case, involves the starter and little more, since the headlights haven’t worked in decades.

My first thought was that the battery must have failed. This seemed odd, though, since Little Mo had been working fine a few days before.

But then an alternative answer popped into mind. Perhaps the problem wasn’t with the battery, but the battery terminals and/or cables instead.

Arguably nothing can shut down a tractor as quickly as an issue with the battery terminals. If the battery is unable to pass an electrical current through the cables to power the tractor, you’re not going anywhere, even if all other parts are in perfect working order.

Starting a tractor starts with the starter, after all!

A tractor battery has two terminals—positive and negative, also referred to as battery posts. Upon these, a pair of color-coded metal cables clamp to carry the current to the electrical system.

There’s plenty that can go wrong at the point where the clamps make contact with the battery terminals. The terminals and/or clamps can corrode over time, weakening (or halting entirely) the flow of electricity. Less messy, but still problematic, are loose clamps that fail to securely grip the terminals.

In Little Mo’s case, loose clamps turned out to be the culprit. They’re a little worn out and probably due to be replaced. After tightening the bolts, though, Little Mo has been running happily without any further issues. This proves once again that old tractors really are the best.

The latest may not be the greatest, but it’s not hard to make a case for old tractors !

If corroded terminals and/or clamps had been the issue, though, the solution would have been a bit more complicated.

Many do-it-yourself folks are game to clean corroded components themselves. By mixing a tablespoon of baking soda with approximately 1 1/2 cups of water, these amateur mechanics can use a toothbrush to delicately scrub the resulting solution across corroded terminals and clamps. This cleans the corrosion and restores parts to working order.

But working with and around tractor batteries can be a safety hazard. Water is a good conductor of electricity, so there’s a risk of electric shock if you’re not careful, or if you connect/disconnect the battery cables in the incorrect order (review your tractor’s manual and read battery labels for safety advice).

Also, keep in mind the corrosion you’re dealing with is sulfuric acid, which can be a dangerous irritant to your skin, eyes and lungs. The goal is to neutralize the acid with the baking soda, but there’s still a risk involved.

All battery maintenance—even something as simple as changing or charging the battery—should be undertaken with gloves and safety goggles. And if corroded components are preventing your tractor from starting, consider having a professional mechanic perform the cleaning.

If the damage is too extensive, replacing the battery and/or clamps is a final option that can restore your tractor to perfect working order.