Do You Know Tractor History? Here’s a Test

Think you know a lot about tractor history and the various popular models through the years? See if you can identify these two rusty relics. 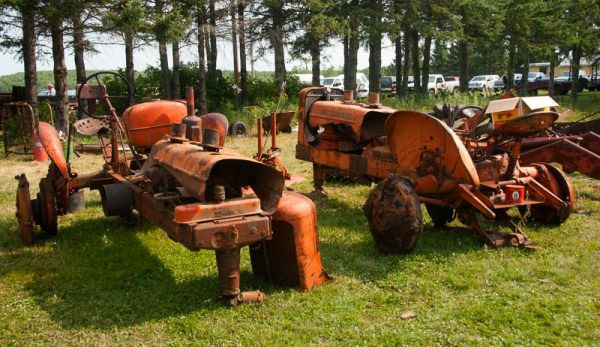 It’s my impression that most hobby farmers are fond of machinery, particularly tractors.

Certainly I count myself among those who admire a well-built tractor, designed to work hard at farming for years (or decades). I have a couple of old ones on my farm (a John Deere Model 40 and a Massey Ferguson 135) that still see frequent use.

But Iâ€™m far from being an expert tractor historian with knowledge of all the most popular and significant models through the years. So for all you tractor history enthusiasts, I have a fun challenge for you this week.

Several years ago, I attended a farm auction in a nearby town.

The sheer volume of tools and machinery being sold was impressive. About 10 nice tractors were lined up in a row, plus a seemingly endless supply of implements and attachments, on about a 2-acre plot.

One tractor was even rigged up to power a circular saw blade, essentially turning the tractor into a mini sawmill. There didnâ€™t appear to be any safety features, though. The giant blade was simply positioned behind the tractor with no guards or covers or anything. You would need to be careful around a machine like that.

One of the most entertaining areas of the auction display was toward the back, behind a row of windbreak trees. This is where the farm scrap, I guess, was available for examination. I think every old farm has its fair share of broken-down machinery, and this farm was no exception.

Two of the most striking objects in the scrap heap were a couple of half-dismantled tractors in pretty rough shape. They had been red at some point. But by the time of the auction they were more rusty than not, and the rear wheels seemed to be particularly corrodedâ€”perhaps from years of use with fluid-filled tires?

It also appeared that their engines had been removed, as well as their front wheels, leaving behind metal shells with little value except as scrap metal and entertainment for curious tractor fans.

I have no idea of their model numbers, or how old they were, or what became of them. No, I didnâ€™t buy them.

Someone probably melted them down, or hauled them away to a landfill. But I recently stumbled across a photo I snapped of the two tractors. So if you think you know a lot about old tractors, hereâ€™s an opportunity to put your knowledge to the test.

First offâ€”who made them? And when? Are they the same model? (To my eye, that appears to be the case.) Or are they slightly different?

On this quiet weekend deep in winter, have fun researching tractor history.