Will This Hurt My Chicken? We Examine 5 Treats

We like to give chickens our scraps as well as other items we believe will do them good. An expert tells us about five such treats, including yogurt, hot cereal and corn. 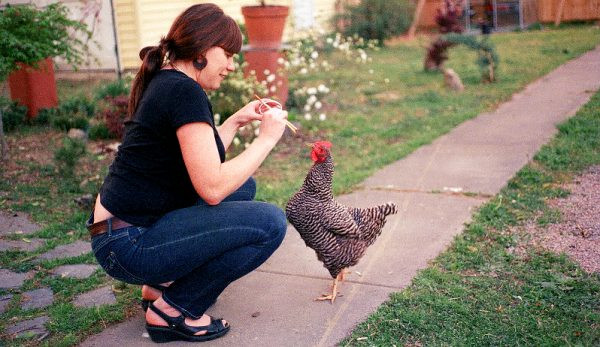 My mother-in-law was always OK with leftovers: Her dogs Amber and Tigger made short work of anything left on a plate or pan. We donâ€™t have dogsâ€”our son Bryce is severely allergic to themâ€”but we have something just as effective: chickens! Our birds are always ready to get their eating on and eagerly rush toward us when they see something in our hands.

While our birdsâ€™ nibbles tend to be remnants from our refrigerator, a number of poultry owners feed their flocks fresher food. As omnivores, chickens happily devour almost anything given to them, regardless of whether itâ€™s goodâ€”or appropriateâ€”for them. I field a handful of questions each week on our farmâ€™s social media site from chicken owners worried about what theyâ€™re feeding or have fed their feathered friends. Some of the most commonâ€”and unusualâ€”concerns follow here:

My friend Maria whips up porridge as treats for her hens on chilly winter mornings.

Who wouldnâ€™t enjoy something warm on a wintry day? Hot cereal grainsâ€”oatmeal, millet, cornmeal, faro and riceâ€”each make a suitable snack for chickens, which makes sense, considering a large percentage of poultry feed consists of natural grains. Hot cereal, however, should not be a substitute for feed, as the latter offers important nutrients tailored for poultry that human cereal lacks. As for cold breakfast cereals? Plain grains such as original Cheerios, Corn Chex and unsweetened Shredded Wheat are OK on occasion. Sweetened, brightly colored cereals, on the other hand, contain too many sugars and artificial colors that poultry (and possibly people) should not ingest on a regular basis.

I recently shared a novel idea for keeping birds cool during the warmer weather: freezing a muffin pan filled with water and fresh corn kernels, then popping out the corn-filled ice muffins as refreshing chicken treats. A couple of flock owners expressed concern that this is bad for birds. One woman stated that sheâ€™d heard corn escalates a chickenâ€™s internal temperature.

â€śThere is always metabolic heat being produced when foods are digested,â€ť notes poultry nutrition expert Dr. Darrin M. Karcher, the extension poultry scientist at Purdue University. â€śThere is no need for concern when feeding corn to oneâ€™s flock. Considering chicken diets are corn-soybean based, if this rumor were real then we would see more problems in our poultry production.â€ť

Many of us eat fresh or strained (Greek) yogurt for the probiotics found within. Several poultry keepers have told me over the years that they give their birds the following treats: a container of plain yogurt every morning so the chickens can also benefit from those probiotics. Every now and then, I have fielded a question from the same flock owners, worried that their birds might be suffering from coccidiosis because of the prevalence of diarrhea. While there is a chance these chickens might harbor the eimeria parasite that causes coccidiosis, the more probable cause of this feathered flux is the ingested yogurt.

â€śDairy is not a food that chickens would encounter in nature, and it is not part of a domestic birdâ€™s diet,â€ť states Karcher. â€śI would anticipate diarrhea from those birds ingesting yogurt. There might be some probiotic effect from the active cultures, but there are other resources tailored for poultry that would give the birds those cultures.â€ť

Recently I received a message from a backyard flock keeper, somewhat panicked that she had just poisoned her birds. With the arrival of spring, she had started a regimen of increased activity and healthy eating. This involved giving the junk food in her pantry to her poultry as treats â€¦ including what was left in her package of cream-filled chocolate cupcakes. Someone then told her that chocolate is poisonous to dogs. She messaged me, certain that her birds were going to keel over any minute.

Chocolate poisoning, or toxicosis, does indeed occur in dogs and some other animal species, causing life-threatening cardiac arrhythmias and central nervous system dysfunction. Death by chocolate has been reported in livestock as well, but these typically occur when animals are continually fed cocoa byproducts or repeatedly ingest mulch made from cocoa-bean hulls.

â€śGiven the minimal amount of chocolate in those cakes and that this was a one-time thing, I would not be concerned,â€ť observes Karcher. â€śHowever, a general rule is do NOT feed your chickens chocolate. It is not a normal item they would find for consumption, anyway.â€ť

I absolutely adore avocadoâ€” tasty, healthy and filling. I eat several each week, and I have to continually stop myself from putting the skins in our â€śchicken crock.â€ť While the fruit is wholesome for humans, avocado can cause myocardial necrosisâ€”damage and death to the heart tissueâ€”in chickens, turkeys and many other bird and mammal species. When eating or preparing foods with avocado, the safest place for the seeds, skin and other nonedible parts is in your garbage can. If your birds free range, definitely do not add these to your compost pile.