The invasive, odiferous tree of heaven attracts pollinators but is toxic to other plants. It has human medicinal uses, but cutting alone encourages more growth. 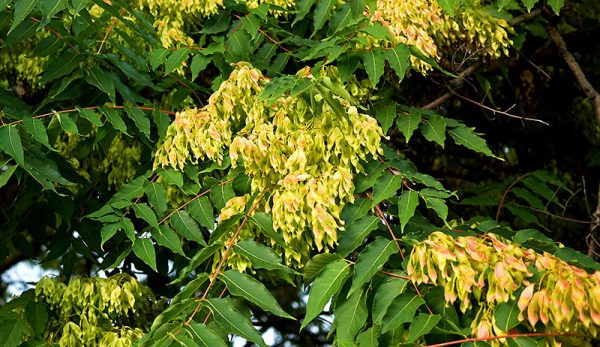 As I pulled weeds in an urban community garden this week, I occasionally smelled what I thought was a nearby peanut butter factory. It was a common aroma, the toasty, oily scent that locals taught me to recognize within a few months of my moving to the neighborhood. But this smell was a little different, a little more rancid, but not exactly unpleasant. Another gardener commented on the â€śyucky cooked meatâ€ť smell, holding a large weed in her hand that sheâ€™d just yanked out by the roots. The smell was coming from this pervasive plant that sprouted from the rubble of a blighted property, with spear-shaped long leaflets flailing out like a palm tree. Itâ€™s known in some circles as a ghetto palm, and in others as tree of heaven. The duality of relationships different cultures have with this plant characterizes everything Iâ€™ve learned about it.

The Smell of Heaven, or Hell

The odor of the leaves, bark, flowers and roots of this invasive exotic tree is one of the distinguishing identifiers to tell it apart from black walnut. The compound leaves resemble black walnuts, but their leaves smell like walnuts when crushed. So if you have a nose for nut nuances, you can pick this one out of a look-alike lineup. Sumac also looks similar but has a milky sap, which tree of heaven does not.

Various references describe tree of heavenâ€™s flowers as â€śobjectionableâ€ť or â€śdisagreeable to humansâ€ť and â€śfetid-smellingâ€ť yet honeybees, flies, beetles and other pollinators swarm to the clustered spikes of creamy-yellow flowers (technically called panicles). While it attracts these insects, it is also toxic to other plants, rodents and microbes. Allelopathic components chemically restrict growth of neighboring plants. The concentration varies depending on time of year and the health of the plant, and its extracts have potential as herbicides. It also inhibits growth biologically with a thick mat of lateral roots that particularly prevent native plants from gaining ground.

Tree of heaven is culturally significant in its homelands of central China, Taiwan and Korea, where it is pruned to perfection, showcased and revered. It made its way to the U.S. East Coast as an ornamental plant, passed from Chinese to French and then English hands in the 18th century. Not long after, Chinese railroad workers brought it to the West Coast, probably for its traditional medicinal uses. It has spread to Canada and Hawaii as well, but is most invasive in the regions where it was first introduced. The same is true in Europe, Argentina, Australia and Africa; where human settlements built roadways, tree of heaven has followed their path.

The plant itself is a pioneer species, an early successional plant in a tropical forest ecosystem. Where soil is disturbed, whether through natural processes or as a side effect of paving the way for civilization, tree of heaven seeds sprout up. The more common means of reproduction is through root sprouts. The trunk can take a beating and bounce back in greater numbers. Nutrients and water retreat down into roots during times of stress, storing valuable resources in a literal root cellar during drought, fire and destruction of above-ground growth. When the time is right, that energy pushes sprouts up to leaf out and photosynthesize, appearing as far as 90 feet from the parent stem.

Tree of heaven has been explored as a regenerative pioneer on mineland, where a quick fix is needed to stabilize barren soil and begin rebuilding an ecosystem. In coal country, the soils can be polluted with mercury and sulphur, and tree of heaven is a good remediation plant to absorb those contaminants. On the other hand, itâ€™s a very sensitive ozone bioindicator, so even though it thrives in cities and in polluted soil, high levels of ozone will cause spotted and dropping leaves.

More Paradoxes in One Plant

Tree of heaven could be tree of hell if you are allergic to the flower pollen, and serious dermatitis can result from skin contact with the sap. Yet the entire plant offers healing qualities and is used as a mainstay in traditional Chinese medicine. Stem bark, root bark, leaves and fruits hold a wide array of healing properties, mainly astringent, known for treating diarrhea, asthma, seborrhea and ophthalmic conditions. In modern western medicine, plant extracts are being tested to treat cancer, HIV and malaria.

The Silky Side of Tree of Heaven

Another relationship that ties tree of heaven to people is through hosting, or farming, a silkworm, Samia cynthia, also known as Ailanthus silkmoth. The caterpillar produces a very durable strand of silk, and while the insect is also native to China, small populations were established in U.S. cities, beginning with Philadelphia around 1860. Entrepreneurs attempted to make a small industry out of the caterpillar silk, but failed to replicate the Chinese method of reeling the fibers from the cocoons and the material was not strong enough. Within another 40 years, there were reports of S. cynthia caterpillars decimating the leaves of the shade tree that it depended on. In the 1980s a case study published by the American Entomological Society explained that the urban habitat might have given the silkmoth a better chance at survival in the city than in suburbs and in the country. In New York City, for example, tree of heaven thrives in sidewalk cracks, in shady alleys, at the bases of bridges, in garbage dumps and in abandoned warehousesâ€”all places where birds are less likely to prey on caterpillars. That was until European starlings were introduced in Central Park in the late 19th century, and their populations began filling urban niches where native bird habitat had been displaced by development.

How to Manage Tree of Heaven

Left alone, tree of heaven should self-prune and run out of space. This is somewhat typical of pioneer species, they just run their course. To accelerate that process, you can shade it out by promoting a healthy overstory of canopy trees. Spread native tree seeds so at least there is some competition in disturbed urban areas.

In the short term, cutting alone will only encourage more growth from tree of heaven. Even control with herbicides is a short-term fix and must be integrated with changing the conditions that allow these and other invasive species to gain ground. After digging out a tree, replace it with a native tree or other beneficial perennials. In addition, because tree of heaven disperses chemicals through its roots, it can transfer herbicides to valuable trees. Herbicide use should be a last resort so you donâ€™t pass the poison on to the neighboring community.