Improve The Health Of Trees Via Urban Soil Rehabilitation

Development can have unintended negative effects on soil, but one researcher's method has reinvigorated the growth of trees in urban forests. 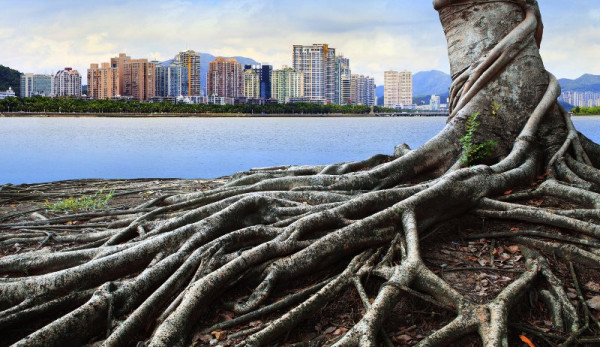 Planting trees, such as creating an urban food forest, is a noble and much-needed endeavor that benefits cities and humans alike, but often these efforts feel like failures because trees donâ€™t grow as vigorously as expected, or they even die within the first couple of years. The roots of trees in cities have it rough. You can assume that underground is as crowded as above ground, with pipes and building foundations at every turn. When roots are growing, spreading out in the soil to find nutrients and water, they follow the path of least resistance. Where the soil is light and fluffy, the roots stretch and explore. Where the soil is compacted or an obstacle exists, the roots respond by shortening their fibers and stunting their growth.

Like these trees struggling to make a life among concrete and traffic, if you have an urban farm, you face different challenges than rural farmers. The holistic farmer knows that everything depends on the soil, and understanding soil is the key to working with what it has to offer. In the city, the history of soil in a given location could have a complicated past that youâ€™ll never completely understand.

Can Your Soil Support Trees?

Soil tests that your local extension office run will give you the basicsâ€”pH, various nutrients, organic matter and some heavy metalsâ€”a snapshot of the few inches of topsoil. In the country, agriculture decisions can be based on how the soil forms over large areas, and the U.S. Department of Agriculture’s soil survey map is a helpful resource to use in planning. But it will identify only the soil type that was beneath the houses and driveways and streets before development.

Susan Day, associate professor at Virginia Tech, has studied compacted soil and observed how even land development labeled as â€śsustainableâ€ť forgets to include the soil in the planning. She has studied the effects of simply harvesting the topsoil and placing it back where it was in contrast to leaving the soil undisturbed during construction. While back-filling seems like a relatively benign way to keep your soil on site, it resulted in major reductions in soil health. In her study, macroaggregates were reduced by 34 percent; organic carbon reduced by 35 percent; mineral-bound carbon reduced by 47 percent; and drainage was significantly reduced as well. In short, even if your soil is placed back where it came from and not compacted, disturbance has major effects on its health.

Small-scale solutions begin with doing your site assessment. Probe soil, dig holes, test pH and learn as much as you can about your soil. The USDA soil survey map will show you whatâ€™s deep down beneath your city soil, but it wonâ€™t tell you whether the soil was scraped off when your house was built, or whether gravel and construction trash was used to fill in and level your ground. To find out, get out there and dig around if you havenâ€™t already. Understanding your soil texture by feel is fun and simple enough to for kids to do. To get into more complicated analysis of your soil texture, see the USDAâ€™s soil texture calculator and the triangle graphic.

Dayâ€™s team uses this pyramid to determine a threshold called â€śroot growth limiting bulk densityâ€ť which refers to the point when roots stop growing. Day warns that any and all compaction affects roots, regardless of soil type or species of tree.

Developers are usually tasked with outfitting neighborhoods with pretty trees after theyâ€™ve ripped up the topsoil. The species that grow best are those more tolerant of compacted soil and higher pH levels. These trees in their native habitat are bottomland species, meaning they are found where the soil is saturated and the oxygen levels are lower. The American Elm is a good example of a bottomland species used as an adaptable street tree. Many neighborhoods were lined with this monoculture until Dutch Elm disease (which originated in Asia) was accidentally introduced to North America in the 1930s. During the next five decades, massive tree losses from the disease devastated cities throughout the Northeast to the Great Lakes. Even â€śsustainableâ€ť development must include diversity of trees along with soil health, or subsequent risks associated with monocultures could be collateral damage to the soil compaction.

Dayâ€™s team has developed a rehabilitation technique that can help improve compacted soil in some situations. It doesn’t correct pH problems, and it cannot be used around big trees because it would cause further damage. But for a new housing developer or a homeowner with a big yard and a desire to plant trees, it can work wonders for improving the aggregates in soil that are essential for good aeration.

The complete specifications for the procedure are available at Virginia Techâ€™s Urban Forestry website.

Running tests after five years, Dayâ€™s team found that the treated soil was much less compacted, and trees grew much more vigorously. After seven years, the tree canopy size was double that of an untreated site.

While the best alternative would be to prevent compaction in the first place, this rehab technique could be a helpful remedy for the hardships that urban forests endure. Choose wisely when planting your trees. Plant natives as well as fruit- or nut-producing trees that support wildlife and your own diet, and you could benefit from taking such good care of your soil for decades to come.