It's hard to wait for warm weather to ripen garden tomatoes, so plant these early season heirloom tomatoes for a sooner seasonal harvest. 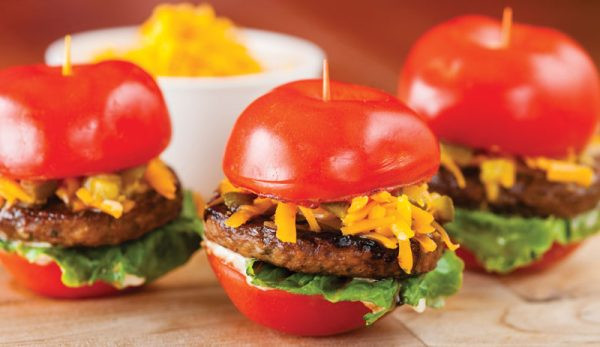 At the time of this writing, it‚Äôs snowing outside my farmhouse window. Right now all I can think about are garden-fresh tomatoes, juicy and warm, brightly colored and bursting with flavor. But the calendar reminds me that it‚Äôs going to be a while before the garden resumes its brilliant production of tomatoes and fills the kitchen with unparalleled delight.

Is it any wonder, then, that gardeners continually seek out ways to shorten the tomato-growing process?¬Ý

I Want It Now

Face it: Tomatoes take time. Sure, we tell ourselves we can show patience. But, truthfully, we want tomatoes and we want them as early in the season as possible!

Of course, we also want these early tomatoes to be packed with flavor. And if they were heirlooms, it‚Äôd be even better.¬Ý

Is that too tall of an order? Maybe it is, but it‚Äôs not impossible.

‚ÄúMany of the common or most popular tomato cultivars are what we call ‚Äòmain crop‚Äô types, meaning they need 75 to 80 days to ripen,‚Äù says Daniel Goodspeed, a horticultural consultant with Jung Seed Co. ‚ÄúBecause most gardeners must wait until the last average frost date to plant, these main crop tomatoes won‚Äôt give fruit until the end of July.‚Ä¶ Tomato lovers can speed up the process to first fruits by choosing wisely and planting some early season tomato varieties.‚Äù

Read more: Save your heirloom tomato seeds this year! Check out this video to learn how.

But what constitutes an early season tomato variety?

‚ÄúWe would consider early season tomatoes as those that ripen in 60 days or less,‚Äù Goodspeed says.‚Äù

(Important distinction: When we talk about ‚Äúdays to maturity‚Äù for tomatoes, we‚Äôre talking about the number of days after transplant, not counting from the date you originally planted seeds.)¬Ý

It‚Äôs easy to see why gardeners find allure in the idea of harvesting tomatoes two to four weeks earlier than the average tomato variety, especially in regions with short growing seasons.

‚ÄúMost of these early bearing tomato plants have an ability to set fruit in early season cool temperatures, although the plants themselves are still tender and require adequate protection.‚Äù

Just as a quick refresher of tomato terminology. When you hear the term open-pollinated, it means that the plant breeds true (you can save the seeds).

A hybrid, however, is the result of a cross of two distinct varieties. If you save the seed from a hybrid variety, it probably won‚Äôt produce the same characteristics as the parent plant.

Heirlooms are open-pollinated varieties that also have history. But there‚Äôs a lot of variance in what defines an heirloom variety.

Sometimes the term is reserved for varieties that are pre-1940. Other times it only refers to varieties that have existed at least 50 years, or sometimes only 20 years. And sometimes World War II is used as a defining date.¬Ý

The Advent of Early Girl

The interest in early season tomatoes is nothing new. For nearly 50 years, gardeners have enjoyed the produce of the Early Girl hybrid variety, developed in the mid-1970s.

Early Girl burst onto the tomato scene amidst plenty of publicity. It soon found a permanent place in gardens across America.

Gardeners loved the lightning-fast maturity of Early Girl, which readies in a mere 50 days. The breed also boasts good reliability and disease resistance. It‚Äôs been a staple in gardens ever since.¬Ý

But gardeners are always on the lookout for something new, which in this case is actually something old. As interest in heirloom and open-pollinated varieties increase, gardeners have sought out heirloom varieties with similar characteristics to Early Girl and other early maturing hybrids.

And they do exist!

While the early season varieties aren‚Äôt as numerous as the 80-day heirlooms, we still have plenty of options to consider. Here are 10 extra-special, early season, open-pollinated tomato varieties. (How‚Äôs that for a mouthful?!)

Years ago, when I was new to heirloom tomatoes, Stupice was the first early season variety I tried. It was a good choice. This very nice indeterminate variety produces fruit in as little as 52 to 55 days after transplant.¬Ý

I didn‚Äôt find it to be hugely flavorful, but flavor is obviously subjective. And many people love the taste of Stupice.

It produces well and is a nice addition to the garden. The variety originated in the former Czechoslovakia and has been in the United States since the 1970s.

‚ÄúThese 2-ounce saladette-type tomatoes have a sweeter flavor and plants can yield plenty of fruits to cook with and share,‚Äù Goodspeed says.

(OK, so you‚Äôre all wondering: How do you pronounce ‚ÄúStupice‚Äù? Answer: It‚Äôs not like you‚Äôd think. There doesn‚Äôt seem to be a definitive consensus on the exact pronunciation, but my research indicates it‚Äôs something like stoo-peet-say.)

If you think that any tomato named ‚Äúmidget‚Äù is probably small, you‚Äôd be right. But you probably aren‚Äôt envisioning just how small Mexico Midget tomatoes are.

These tomatoes grow to approximately 1‚ÅÑ2 inch in diameter. But don‚Äôt be discouraged by their small size, because these teeny-tiny tomatoes are top-notch in the taste department.¬Ý

‚Äú[This variety] from south of the border forms long trusses that will set copious amounts of small, red, true cherry tomatoes with a fine, true-balanced tomato flavor,‚Äù Goodspeed says. ‚ÄúYou‚Äôll eat half of what you pick before you get into the kitchen door and have to go back for more.‚Äù

Once upon a time, I bought a Koralik tomato plant. It‚Äôs an early producing Russian heirloom and I thought it might feel right at home in Zone 4a where I farm, in northern Wisconsin.

Koralik produced well all summer, setting plenty of lovely red cherry tomatoes with nice flavor. All in all, I declared the variety a definite success in my garden.¬Ý

But the best was yet to come. By the next summer, my garden beds spilled over with volunteer Koralik plants. Where I live in the frozen northern Midwest, tomato seeds aren‚Äôt supposed to be able to survive overwinter in the garden.

But nobody told that to the indomitable Koralik plants. They thrive year after year in my garden from the descendants of that original plant.

Koralik clearly mastered the ‚Äúsuperhardy‚Äù part. But it‚Äôs also a reliable producer and well worth a place in your garden. It matures in 55 to 60 days.

If you‚Äôd like an early season variety that‚Äôs a bit on the larger size, how about Bloody Butcher with its clusters of 3- to 4-ounce fruits? These clusters are impressive, especially considering that tomatoes are ready in just 55 days. And this indeterminate variety just keeps on producing all summer long.¬Ý

It‚Äôs an old favorite with a lot of fans. According to Goodspeed, Bloody Butcher is an ‚Äúindeterminate that produces Campari-type, medium-sized, round, dark-red, 4-ounce juicy fruits for salads, small slicers, sauces or salsa.‚Äù ¬Ý

In a sea of 2-inch red tomatoes, Glacier stands out, thanks to the light smattering of orange in its otherwise-red skin. People consistently describe Glacier as sweet. This is high praise indeed, considering that early season tomatoes as a group aren‚Äôt noted for breaking flavor records.¬Ý

In addition to its excellent flavor, Glacier is hardy, produces in less than 60 days and continues producing throughout the season.¬Ý

How does a 40-day heirloom tomato sound? Quedlinburger Fruhe Liebe is an indeterminate variety that‚Äôs memorable thanks to its distinctive name and its incredibly early maturity.¬Ý

‚Äú[It] is named for the medieval German town in which it‚Äôs said to have originated. And the words fruhe liebe translate to ‚Äòearly love,‚Äô‚Äù Goodspeed says. ‚ÄúThe 1- to 2-inch, red, round fruits have a rich, complex, slightly acidic tomato flavor. And they set Campari-style on potato-leaf plants like many true heirlooms do.‚Äù¬Ý

I admit it: I have a soft spot for tomatoes with stripes. So it‚Äôs no surprise that Tigerella caught my eye with its bright red coloring and yellow-orange stripes.¬Ý

It‚Äôs similar in size to most of the other early varieties (2 inches) and is an indeterminate variety that matures in approximately 65 days. A fun choice for gardeners who love Green Zebra but want to harvest striped tomatoes before 80 days.

This one isn‚Äôt quite as early season as the others, but it‚Äôs still an earlier-season variety. I include it here for a few reasons.

If you‚Äôre looking for a larger tomato that still won‚Äôt take all summer to produce, this indeterminate variety might be a good option.¬Ý

It‚Äôs still snowing outside while I write this. But thanks to these superior early season tomatoes, all of that glorious garden goodness grows closer every day.

May your plants produce abundantly and your kitchen overflow with tomatoes. Enjoy!¬Ý

Summers in Alaska are short and fleeting. So any tomato bearing the name of our 49th state is bound to be an early season variety.

A determinate variety with a plant height of only 24 inches, Sophie‚Äôs Choice is beloved for its impressive productivity and flavor.

Note: This one performs best in cooler climates, so bear that in mind.

This article originally appeared in the March/April 2022 issue of¬ÝHobby Farms¬Ýmagazine.