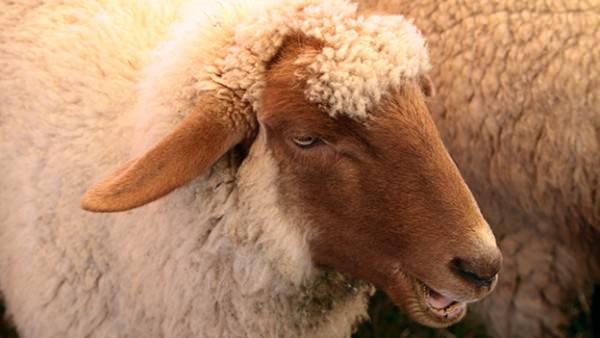 Use: Tunis sheep excel as extremely feed-efficient, productive meat animals capable of thriving on poorer pastures and in hot, dry conditions. According to the National Tunis Sheep Registry website, Tunis lambs require less feed than larger sheep breeds to reach the same market weight within similar time frames. For their size, they yield a high percentage of delicately-flavored meat. Even the mutton (meat of sheep older than one year) is said to be tasty. They also grow a lustrous fleece with a staple length of four to six inches that weighs approximately six to nine pounds.

History: One of the oldest sheep breeds developed in the United States, the modern-day Tunis resulted from crossings of “fat-tailed” sheep imported from Tunisia, a North African country bordering the Mediterranean, with various European breeds. The first importation occurred in 1799, a gift of ten sheep from the ruler of Tunisia to the U.S.; these animals passed into the care of Pennsylvanian Judge Richard Peters. In following years, the breed gained popularity in a number of eastern and southeastern states, garnering fans that included the likes of Thomas Jefferson and George Washington. The Civil War, however, resulted in the demise of most Tunis sheep in the upper South. Today, the American Livestock Breeds Conservancy lists the Tunis in the watch category, its global population estimated to be less than 10,000 animals, although interest in this unique breed seems to be increasing again.

Conformation: You can easily distinguish a Tunis from other sheep breeds by its coppery-red, usually wool-free face and legs, lovely accents for the ivory to cream wool on its body. The Tunis has a well-muscled, deep-chested body with a wide back and a broad, fat tail that’s normally docked. A hornless breed, they possess slender faces and long, pendulous ears. Rams of this medium-sized breed weigh from 175 to 225 pounds and ewes run about 125 to 175 pounds. Raisers praise the long-lived Tunis for its grace, calm temperament, and hardiness.

Special Considerations/Notes: Tunis sheep have an extended breeding season and the motherly ewes experience a high rate of twinning and produce plenty of milk. The lively lambs arrive with red or tan wool that gradually changes to creamy white except for the face and legs. These sheep, thanks to their roots in Tunisia, can tolerate hot weather well, whether humid or arid; of course, ample water should always be provided.