Research shows that the diet fed to a turkey in the first two weeks of life can affect production performance. 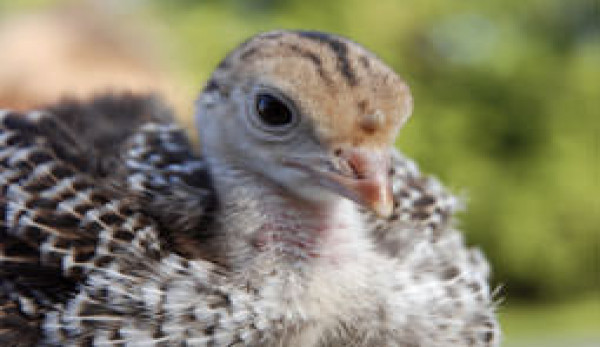 Minnesota remains the No. 1 producer of turkeys in the United States with 46.5 millionÂ turkeys raised last year. Itâ€™s been a difficult year forÂ turkey producers due to increased feed costs over the past year and an expected continuation of increasing feed costs. Because of the high cost of feed, profitability can hinge on turkeys achieving performance as close as possible to their genetic potential.

To assist turkey producers in identifying ways for their flocks to more closely reach their genetic potential, University of Minnesota Extension initiated field trials with other poultry scientists at the University of Minnesota and in cooperation with the Minnesota Turkey Growers Association. The field trial indicated that the period between hatch and 2 weeks of age was particularly critical for the turkey poultâ€™s future growth.

This finding resulted in a new emphasis being placed on research that improves poult performance through nutrition and feeding. Because of the capability of the young turkey poult to grow so quickly, there is a question as to whether the poult requires a more specialized diet for the first two weeks of development. Now a focus has been placed on getting back to the basics in terms of determining if previously determined nutritional needs have changed, and if so, what the impact will be on the turkeyâ€™s future growth.

Another question that currently is being examined is related to the composition of the diet, in terms of discovering if some feed ingredients are better for the turkey poult diet than others. Research has demonstrated long-lasting effects due to the type of diet initially fed relative to its protein content, which is essential for muscle growth. Likewise, a modification of the soybean meal to remove some of the sugars that poults canâ€™t digest was found to improve initial performance. The research confirms the importance of the first two weeks as critical for subsequent turkey performance.