The turkey originated in North and Central America. While European explorers and Asian traders later helped create new breeds, the birds got several names based on geographical misunderstandings. 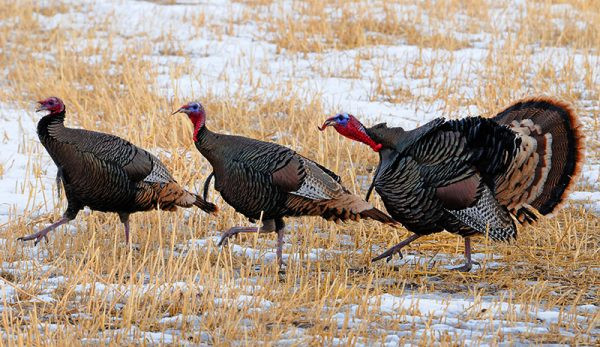 Where did the turkey on your Thanksgiving table come from? You might know the farmer, or maybe you raised it yourself, or perhaps you hunted and bagged a wild turkey. But do you know the real heritage of turkeys?

Wild turkeys have held true to their roots for more than 10 million years, despite many obstacles to ranging freely. Two species are native to North and Central America. The first is Meleagris gallopavo, the common or wild turkey. The second is Meleagris ocellata, the ocellated turkey, which is found in Mexico, Guatemala and Belize. This smaller, copper-colored bird might have been kept by the Mayas and continues to scavenge around Guatemalan homesteads. The wild turkey we know and love in the U.S., Meleagris gallopavo, got its scientific name from three other birds from different parts of the world: the guinea fowl from Africa, and the peacock and the chicken, both from Southeast Asia. Subspecies of the wild turkey live in different geographic regions in North America and possess varying color adaptations.

When colonists arrived in North America, wild turkeys were wildly prolific. They were hunted by indigenous peoples for meat as well as tools made from their bones and feathers. These large, showy birds were revered as friends or as foes, depending on different tribal belief systems. In either case, they held power and were celebrated in tribal dances. However, as the story goes with many of our iconic American species, the turkey was nearly extinct by the early 20th century from loss of habitat and overhunting. Their population had declined to just 30,000 in 1930. Successful land restoration programs have boosted those numbers, and in 2015 there were around 7 million.

Turkeys can live as long as 20 years in the wild. They forage and eat nuts, seeds, berries, some plants and many insects. They like thick woods, fields and swamps, and they roost in low tree branches at night. Turkeys live in small flocks with one male and and several females. They donâ€™t range far from home, they can fly very fast for short distances, and they are strong runners. With excellent eyesight and hearing, they are acutely aware of small details and changes to their environment.

Domesticated turkeys in North America have taken a multicultural route to being the centerpieces of feasts during our annual harvest celebrations. It is believed that wild turkeys were kept by native peoples in the southwestern U.S. and Mexico, around the same time that dogs became domesticated, perhaps as far back as 3000 BCE. Because turkeys are easily baited with corn and are attracted to the garbage that accompanies human civilizations, their relationship with people might have begun voluntarily, with them as opportunistic scavengers. Turkey was not necessarily a regular food for native peoples. For example, certain Pueblo cultures respected the bird as a sacred animal. However, Aztec peoples raised large numbers of turkey in captivity not only for people to eat but also to feed to other captive animals in the Emperor Montezuma IIâ€™s menagerie. Snakes, eagles, pumas and jaguars were among the hungry carnivores he held captive in his zoo in the early 16th century.

Around the same time, Spanish explorers took the domesticated wild turkey from the Americas to Europe. Turkish merchants are thought to have traded in Seville and brought what was called the â€śturkie cockâ€ť to Britain. At this time, the country of Turkey held an exotic mystique, a place from where new and interesting foods emerged into the international trade scene. The French, Italians, Germans and many other cultures perceived the new fowl to be from India, hence the French word for turkey, dindon, from coq dâ€™Indes. In India, however, they called the bird peru. In addition to all this world travel linked to the birdâ€™s names, it was also being shipped directly from the New World to Britain. Turkeys were raised in large numbers there and had become the Christmas holiday custom by 1585.

Breeding in Europe progressed, and domesticated turkeys returned to Jamestown in 1607. Colonists were surprised to see the wild version of the bird in the New World, and they took to hunting it along with other wild fowl. They also raised domesticated turkeys and partnered them well with another newly domesticated native species, tobacco. Turkeys controlled the tobacco hornworm. It was also common for other types of farmers to keep a flock of turkeys as pest control, as they are voracious grasshopper predators.

The breeds of turkeys developed in Britain soon melded into an undefined mix once they were back on their home turf. Beginning in the 1800s, North American breeders established standards for different varieties that continue evolving to this day. Confinement isnâ€™t necessary or even beneficial for raising heritage breeds. Their natural curiosity and foraging skills are well suited to a mixed landscape. The reputation for being dim-witted probably comes from commercial stock. All the while, the intelligent and wary wild turkey continues to grow in popularity and models the dignity of the birdâ€™s origins.

Main source: The Encyclopedia of Historic and Endangered Livestock and Poultry Breeds by Janet Vorwald Dohner