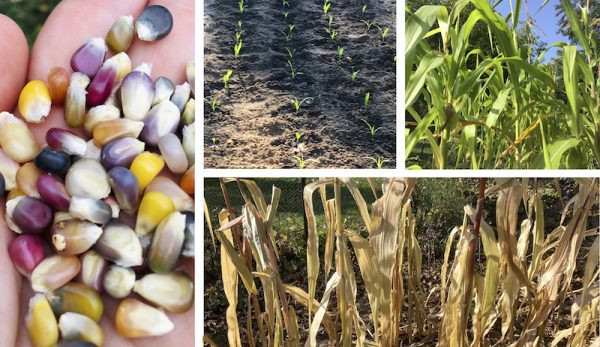 I still remember the day I peeled back the crisp, brown husks from my very first â€śGlass Gemâ€ť corn harvest. Sure, the seeds I’d planted many months before were bright red, purple, orange, blue and even green. Nevertheless, I couldn’t believe my eyes.

The flint corn I’d managed to produce included every shade of the rainbow.

I could’ve ground the firm kernels into flour, popped them like popcorn, or used the intact ears decoratively. Instead, I chose to save most of those first seeds, so that I could grow subsequent generations and share this special variety with others.

Curious to see what kinds of colors you might end up with? You don’t need tons of space to grow a small block of Glass Gem corn, and the end result is pretty magical.

You still have a little time to get your hands on Glass Gem seed. For a more genetically robust crop, you might send away for seeds from multiple sources within the Seed Savers Exchange. (You can learn how to get started with the Seed Savers Exhange here.) Retailers like Bakers Creek Heirloom Seeds also have Glass Gem corn.

Or you might want to turn to Native Seeds/SEARCH, an Arizona-based nonprofit seed conservation group. Native Seeds/SEARCH sells Glass Gem corn seeds derived from the original folks who worked together for many years to grow out and preserve the seed of this unusual variety.

Just who were the people behind the colorful corn? First and foremost was Carl White Eagle Barnes. Barnes was part Cherokee and very interested in growing out and reintroducing several heritage corn varieties.

After seeing some of Barnes’ corn seed up close, Greg Schoen, an area botanist and horticulturist, was intrigued. Via a 2015 SeedBroadcast â€śSeed Storiesâ€ť interview, Schoen shares much of the back story about Barnes and his work.

â€śI was attending a native plant gathering in the southwest part of Oklahoma,â€ť Schoen recalls. â€śThere was an elderly man there with a couple of glass display cases with all of these different native corns. There were probably two or three that were about 4 inches longâ€”maybe not even thatâ€”with all of the colors.

“Not just the earth tones and the reds and such, but all of the rainbow colors were in there in some way.â€ť

According to Schoen, a lot of Barnes’ colors came from Pawnee miniature popcorns and, he suspects, an Osage flint corn variety. Schoen continues, â€śIn the course of the work that [Barnes] did, he was finding a lot of corn varieties that had been lost to a lot of the tribes…. As he started growing these out, he started to see other characteristics show up.â€ť

Eventually, Schoen, along with JosĂ© Lucero of Santa Clara Pueblo and Bill McDorman, former executive director of Native Seeds/SEARCH, would begin growing out generations of the rainbow-colored corn, too. After several years, they stabilized and popularized Glass Gem corn.

Glass Gem corn can take up to 120 days to reach maturity. Because springs where I live have been extra rainy over the last few years, I’ve had to start my seeds inside and very carefully transplant them when the soil is finally dry enough to work.

Ideally, though, you should plant seeds directly in the garden right after your last average frost date.

For best results, space individual Glass Gem corn plants about 6 to 12 inches apart within rows that are about 30 inches apart. If you’re pressed for space, you can also plant sets of three or four seeds in a single mound. Then, plant a few of these mounds a few feet apart.

Because corn is hungry for nitrogen, I amend my soil with finished compost at planting time and again at the end of the growing season.

To naturally deter insect pests, I also plant loads of marigolds near the corn patch. Of course, that may not be enough to fully safeguard your crop. You should check your plants at least once each day for signs of trouble.

If you do have lots of room and want to help spread this seed, Schoen recommends growing 200 to 300 plants in all. (To avoid cross-pollination, you’ll also need to be sure you’re not growing it too close to other types of corn.)

Before collecting your seed, allow the corn to dry completely within ears. When it’s time to pop off your kernels, select the most colorful, robust-looking seeds to save and share next season.