Turn Your Property Into A Prairie

Turn your farmland from overgrazed pasture into prairieland to benefit you, your animals and the nature around you. 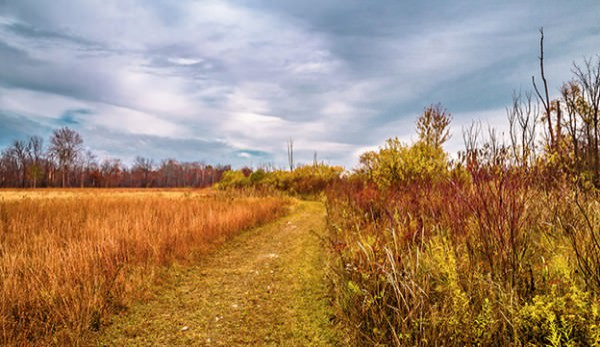 My childhood landscape was wide-open spaces, like the Bob Wills classic song, “Miles and Miles of Texas,‚Äù but without the wistful and adventurous tone. The high plains of Amarillo looked to me like just miles and miles of nothing. Bored with the endless skies and expanses of brown fields, I moved away, first to greener pastures in Tennessee, then to dry deserts in California, and then back to the High Plains. That‚Äôs when I recognized the comforting abundance of the prairie blankets I had taken for granted.

My first summer in Texas as a park ranger gifted me with one of the most amazing wildflower displays on record. It was the long-awaited blessing that followed hard years of drought, fire and flood. As I studied each new blossom, looked up its scientific name, photographed it and learned how our ancestors held a sacred relationship with each plant, I discovered an astonishing, underrated, under-utilized, and under-appreciated landscape.

That‚Äôs right. The entire landscape is an endangered ecosystem, ranked right up there with rainforests and coral reefs. Less than 1 percent of native tallgrass prairie remains in North America. It used to be the largest continuous ecosystem on our continent‚Äîand the most diverse. According to the National Park Service, prairies are home to up to 60 different species of grass, more than 300 species of forbs or flowers, and more than 100 species of lichens and liverworts, not to mention the woody plants, trees and shrubs found along edges and in wetter areas.

For the past 150 years, the rich topsoil of tallgrass prairies has been plowed and converted to farmland. Good soil yields good food, but soil is not a resource that can be quickly replenished. The causes of the 1930s Dust Bowl can be traced back to the Great Plow-Up in the decades preceding this miserable time in America. Millions of acres of biodiverse prairie were turned inside out to plant one staple crop: wheat.

The deceptively simple grassland that waves gently in the breeze can become a fiercely competitive battleground for fire, bacteria, and the secret weapon of prairie plants: their roots. Up to 80 percent of the biomass of the prairie is hidden below ground, in the deeply complex root systems. A testament to the strength of these interwoven roots was sod houses. Pioneers cut the earth into bricks, which were held together by a massive root hair matrix. (This was the old-school version of well-insulated, naturally built and locally sourced tiny homes.) Pioneers settling the prairie had their work cut out for them. The invention of the scour plow in the 1830s made John Deere a popular friend to new farmers.

“But when the prairie‚Äôs deep roots that held soil tightly in place were severed from the land, the ecosystem that had stabilized the land for millennia was disengaged, leading to gullied tracts of land and roiled creeks, streams and rivers,‚Äù explains Randy Weckman in a University of Kentucky‚Äôs College of Agriculture publication “Going Native: Prairie Grass Research.‚Äù “In addition, wildlife, such as bison and prairie chicken, that had lived in harmony with the prairie all but vanished as native stands disappeared.‚Äù

Like wildflower seeds lying dormant, a renewed interest in growing native plants for grazing is beginning to take root.

Not All Prairies Are Equal

A plethora of variations in landscape, topography, moisture, slope and exposure creates niches for plant communities throughout the prairie regions. The geographic range of native prairies in the United States centers along the 100th meridian, which runs through the heart of North Dakota, South Dakota, Nebraska, Kansas, Oklahoma and Texas. In the rain shadow of the Rocky Mountains out west, the soils are thin, the groundwater is deep and the prairie is considered shortgrass. The dominant species include ankle-high buffalo grass and blue grama.

The eastern prairies can receive more than 30 inches of rain per year, and the geologically older soils provide a thicker bed for the roots where the tallgrass prairie took hold. Eight-foot-tall stands of switchgrass, Indiangrass and big bluestem grow here. Between these two ecosystems lies the aptly named mixed-grass prairie, where a mixture of plants are found.

Prairie plants evolved with prairie animals: bison, elk, antelope, prairie dogs, burrowing owls, black-footed ferrets, prairie chickens and even humans. Fires, whether intentionally ignited or sparked by lightning, maintain the prairies as open expanses of grassland and cyclically stimulate growth of native grass seed while stopping the encroachment of trees. Grazing serves a similar function, disturbing the soil just enough to allow undigested seeds and fertilizer to fall into a nice little hoof print. Grazing and fires each bring complex relationships and chemical changes to the systems. Chris Helzer, eastern Nebraska program director for The Nature Conservancy explains in a video interview, “If you don‚Äôt have grazing on a prairie, you lose your plant diversity.‚Äù

A large amount of dry, brittle biomass accumulates each year. Historically, fire took care of this excess and added nutrients and pH balance to the soil, in a beautifully balanced cycle explained in detail on the Tallgrass Prairie National Preserve‚Äôs website.

This biomass could have another application in our day and age of alternative fuels. Switchgrass, for example, has been identified as an economical and efficient source of biofuel and ethanol. Carbon sequestration, the long-term storage of atmospheric CO2 as a way to slow the accumulation of greenhouse gases, has been studied in relation to native prairie plants. A Scientific American article summarizes research that found that “the grasses and other flowers and plants that grow naturally when such lands are left fallow‚Äîspecies such as goldenrod, frost aster, and couch grass, among others‚Äîcan deliver roughly the same amount of biofuel energy per hectare per year if fertilized, yet also reducing CO2 by more than twice as much as corn.‚Äù

Native grasses cost more to establish and cannot withstand overgrazing. They do provide great nutritional quality and palatability when grazed at their peak time of productivity: mid-summer.

The native plants‚Äô root systems provide erosion prevention, which is another major benefit that counteracts the disturbance of hooves trampling the earth. Restoring wildlife habitat for migratory songbirds brings another dimension of life to the pastures. Last but not least, there‚Äôs purely aesthetic reasons for surrounding your little house on the prairie with wildflowers and multicolored grasses: It‚Äôs beautiful!

Now that you are a convinced of the undeniable magnificence of prairies, here‚Äôs how to convert your property back into its prairie roots.

Special steps must be taken to restore native prairie from farmland versus an overgrazed pasture. Crops and animals must be removed first, and in some cases the native seed bank could still regenerate native plants if given a chance to thrive. A series of controlled burns over the first few years can stimulate the right growth at the right time. Clearing out unwanted species will also allow the grasses and forbs to get established.

Research shows that bison, elk and domestic cattle will prefer different foods and will selectively exclude certain plants, as well. Understanding your particular site‚Äôs tendencies, such as which plants are likely to invade, will help you create a management plan for the livestock you raise. The University of Minnesota, among many other universities and extension offices, offers well-researched information on grazing and prairie restoration. Experts are ready to get you started on the right path. The government may have promoted some ecologically questionable programs in the past, but thanks to lessons learned‚Äîremember the Dust Bowl?‚Äîand the increase of farmers interested in permaculture and sustainability, they are doing their best to make up for it.

If you‚Äôre lucky enough to have a little house on the prairie, don‚Äôt take it for granted, like I did. Take time to learn the wildflowers and grasses and appreciate them as they come back to life. Connecting with your prairie will benefit your livestock, your enjoyment of the land, and the wilder world outside your fields.