I've mentioned my old workbench that has traveled from Minnesota to New York to Iowa and back. I think I've torn it apart and reassembled it at least seven times, not to mention the moves from garage to basement and back in various houses. 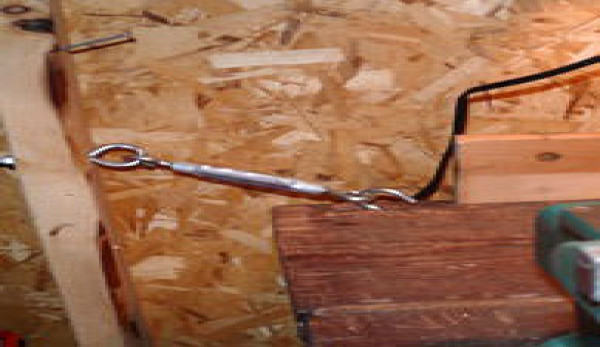 I’ve mentioned myÂ old workbench that has traveled from Minnesota to New York to Iowa and back. I think I’ve torn it apart and reassembled it at least seven times, not to mention the moves from garage to basement and back in various houses. Its lockable wheels are as much symbols of moves as they are facilitators.

As much use as the workbench has provided me over the years, all its mobility has made it less stable than Iâ€™d like. I could remove the wheels, which would help, but at the same time, I don’t want to give up the option of sliding it out from the wall and even out the door as needed. Its recent move to myÂ revamped garden shed/workshop gave me an opportunity to stabilize it with wheels intact. All I needed was a couple of turnbuckles and some 1/4-inch eye bolts.

Turnbuckles are simple answers to pulling together two objects. With one open eye bolt and one closed eye bolt, attaching a turnbuckle is simply a matter of matching it up with the already attached bolts. Turning the central shafts snugged the workbench up tight to the wall and gave me a level of stability I havenâ€™t enjoyed in the 30 years I’ve had the bench. Better yet, it will only take me a few minutes to remove the bolts for the next move.

My only question is why I didnâ€™t do this before. If you have a shaky workbench, don’t wait 30 years to turnbuckle it in place.