With frost’s first kiss, turnips go from being bland ol’ root vegetables to the belle of the ball. 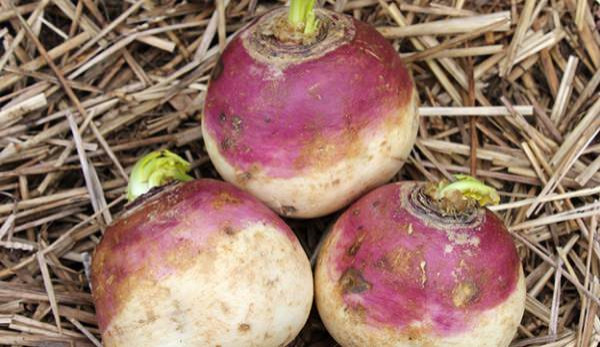 Admittedly, turnips are not sexy vegetables. No one in their right mind would ever describe them by such tempting terms as juicy, colorful or luscious. Nor are you ever likely to hear someone wax poetic about their favorite turnip variety like they do about their favorite heirloom tomato. They’re turnips, for Pete’s sake. Even the name is decidedly unsexy.

But while the humble turnip may fall short in the charisma department, it more than makes up for it in flavor. Particularly this time of year. You see, much like carrots, turnips are sweetened by Jack Frost’s arrival, and with a couple of kisses from him, that humble turnip you once turned your childhood nose up at becomes an entirely different creature. In fact, come autumn, the turnip is the Cinderella of the garden—changing from rags to riches with just a few small dips of the mercury.

Here’s the thing: I know what you’re thinking. You’re thinking that you’ve tried turnips in the past and you just didn’t like them. To you, my skeptical reader, I ask the following questions:

1. Was the turnip you ate a homegrown turnip?

If it was store bought, it doesn’t count. That’s like saying you don’t like tomatoes when all you’ve ever eaten is one of those cardboard pith-fests from the grocery store. Or you don’t like asparagus when all you’ve ever swallowed is a mushy, army-green spear straight out of a can. I put frost-kissed turnips in the same category as sun-warmed tomatoes and fresh-picked asparagus. And that category is: Awesome.

2. Was the turnip you ate pulled out of the soil the same day it was picked?

While turnips are famous for their long-term storability, freshly harvested turnips have the best flavor, in my opinion. When they’ve been stored on the grocery shelf, or even in a root cellar, for more than just a few days, the flavor isn’t as sweet. Once the roots dry out, the texture changes, too. So I say, pull ’em out of the dirt and take ’em straight to the kitchen.

If you want to keep the roots for winter use, don’t store them inside or even in the fridge. Instead, store them right in the garden. Mulch your turnips with a thick layer of straw and cover the area with plastic. When you’re ready to harvest, brush off the snow, pull up the plastic, scoot the mulch to the side, and tug up a couple roots.

3. Was the turnip you ate picked while it was smaller than a tennis ball?

Much like beets and rutabagas—don’t get me started on rutabagas … they’re another Cinderella of the garden—turnips taste way better when they’re smaller than your fist. If they get too big, the texture gets woody and their sweetness goes bye-bye. What all this means is that for the best results, you should plant your turnip seeds about 50 days before your first fall frost is expected. The roots will reach the perfect size just when frost hits. Viola!

4. Was the turnip you ate cooked properly?

Like most Cinderella stories, preparation plays a key role, and the turnip’s tale is no different. With a flavor I’d describe as mellow, buttery and earthy, a frost-kissed turnip picked at its prime can be the belle of the ball. But all that marvelous flavor is easily spoiled by a clueless chef. Do experiment with different recipes, but don’t ignore the fact that simple preparations bring out the turnip’s best flavor. Try the roots boiled and mashed with butter and browned leeks, roasted in olive oil and dressed with diced bacon and cracked black pepper, or stewed in beef broth with carrots, onions, potatoes and parsley. You won’t be disappointed.

So, to all those turnip-haters out there, I say get over it. Sometimes there are unrivaled riches hidden beneath a whole bunch of unsexy.

One reply on “Turnips Just Got Sexier”

[…] Turnips don’t just have to be a fall crop. Early-planted turnips are a great spring root crop, especially when harvested young. I pick them when they’re the size of a ping-pong ball and enjoy them roasted or mashed. The young greens make great additions to salads, and mature greens are delicious sautéed or tossed into spring soups and stews. […]