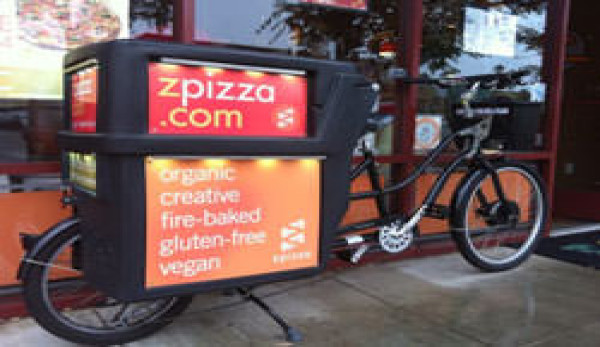 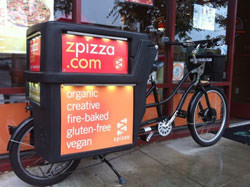 The latest pizza trend isn’t about off-beat toppings like elbow noodles, squid ink or fried eggs; instead, it’s coming from some independently owned pizzerias that are taking steps toward improving air quality: by delivering fresh-out-of-the-oven pies on bicycle.

Faced with soaring gasoline prices and cramped parking conditions outside their restaurants, as well as in neighborhoods where the pizza is delivered, several pizzerias — from Southern California to New York City — have decided to put their delivery drivers on two wheels. In some cases, now that circling the block for a parking spot or opting for double-parking is out of the equation, this has put the hot pies into customers’ hands faster.

While restaurants and pizzerias in populated sections of Europe and New York City have been doing this for awhile, the practice is just now catching on in other regions, particularly the West Coast, where warm weather (and beautiful conditions for bicycling) prevails all yearlong.

Among the newest pizzerias to add bicycle delivery are two in Portland, Ore.: Hot Lips Pizza and Old Town Pizza. Old Town Pizza uses tangerine-colored bicycles with a hefty metal box attached to the back (to store the pizzas and keep them hot) to deliver the pies. Its pizzas are eco-friendly, too; many of the toppings are from local organic farms, and the flour is sourced from Northwest farms that use environmentally and socially responsible farming practices. Portland’s Hot Lips Pizza also follows sustainable practices, including sprinkling locally grown spinach and regional bacon on its pizzas. Bicycle deliveries are offered within 3 miles of each store.

Farther down on the West Coast, Zpizza locations in Seal Beach, Calif., and Huntington Beach, Calif., deliver pizzas with the help of electric-powered bicycles. The service launched in 2009, and earlier this year, the pizza chain announced it was adding even more bikes. Made in nearby Santa Ana, by Thrust Electric Bicycles, these bikes are perfectly suited for hauling hot food, with a small basket just under the handlebars and a larger container just behind the seat.

“The bike is an efficient and earth friendly way to get pizza to our customers,”  says Alan Grant of Zpizza in Seal Beach, Calif. “Since it is electric powered, we can get to local customers as fast as a car can — sometimes faster.  It saves us from having to use gas to just drive around the block, and it sends a message to people that an electric vehicle can be a viable replcement for a car.”

PizzaMarketplace.com, which provides industry insight about trends in the pizza business, reported in January that Ed Zimmerman, president of the Food Connector says that, “green is the new black” for many pizzerias, including product traceability. Tying into that, and also under a sustainability umbrella, bicycle deliveries help pizzerias market themselves as an eco-friendly restaurant.