U.S. Adopts The American Bison As Its National Mammal

Paying tribute to the animal that once free-ranged the lands of the American West, the U.S. now officially gives the American bison prominent social standing. 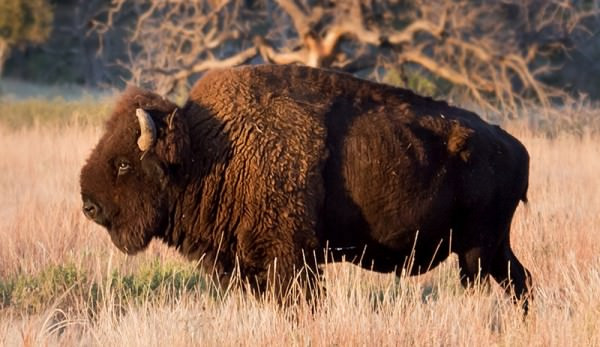 The largest mammal in the U.S., bison once dominated the American WestŌĆömillions of them in prehistoric times. As the country became settled, the bison population was nearly wiped out, with just a few hundred left by the late 1800s. Public lands now support about 10,000 bison, plus there are farmers and ranchers raising bison with a population estimated at 160,000.

Bison bison bison (the kind of hilarious scientific name for the American bison) has been an unofficial symbol of the U.S. for more than a century, with its image placed on the back of the nickel and on the U.S. Department of the Interior’s official seal. Kansas, Oklahoma and Wyoming consider the American bison their state mammals, and a bison is on the Wyoming state flag.

In a historical context, bison were a primary food source for American Indians, and the animal is still integral to their culture. Today, farmers keep bison for meat production and to train ranch horses and horses competing in cattle work. These are often not pure-blood bison, rather bison crossbred with cattle.

I was first introduced in an up-close-and-personal way to bison by Bill and Linda Black, who I used to ride horses with at Cross 9 Ranch. They kept bison and used them as part of their horse-training program. My second up-close-and-personal bison experience was at Yellowstone National Park when an enormous bison bull was laying directly on the trail that I was trying to hike back to camp. (This required a significant detour.)

The Trouble with Bison

There is controversy surrounding just about every animal managed by the U.S. government on the open range. As is the case with bison, it’s often related to population control. According to a Reuters article, the government sends ŌĆ£hundreds of buffalo to slaughter each year when their numbers in Yellowstone exceed a population target of 3,000. The long-standing policy was designed to keep stray Yellowstone bison from infecting cattle from neighboring ranches with brucellosis disease.ŌĆØ

Ranchers surrounding roaming bison herds understandably want to protect their own cattle and domesticated bison herds from diseases, like brucellosis, which is present in the herd in Yellowstone National Park. It’s actually a lawsuit brought by the state of Montana that requires that Yellowstone keep its herd trimmed. So unless a farmer or rancher has the space, facilities and desire to adopt in 1,000 or so bison every few years, I’d like to hear your thoughts on how to keep the population corralled.

We’re not the only country to adopt a national mammal symbol and not the first to put the spotlight on an animal that’s part of the farming scene. There’s already another country to have a bisonŌĆöBelarus, with a European bison (Bison bonasus). Nepal’s is the cow. The Kurdistan region of Iraq has the goat. Spain, not surprisingly, celebrates the bull. There are no countries lauding poultry, pigs or sheep that I could find. While I love those livestock species, it’s reasonable that a country wouldn’t want to be associated with animals stereotyped as unintelligent, timid or filthyŌĆöhowever untrue those stereotypes may be.

Check out the U.S. Department of the Interior’s quick facts about bisonŌĆöif for no reason other than to see the really lovely photos of these animals and be reminded of how actually majestic these beastly looking creatures are.