Take grafting beyond trees to grow healthier plants and more of the delicious tomatoes, eggplants and peppers you love. 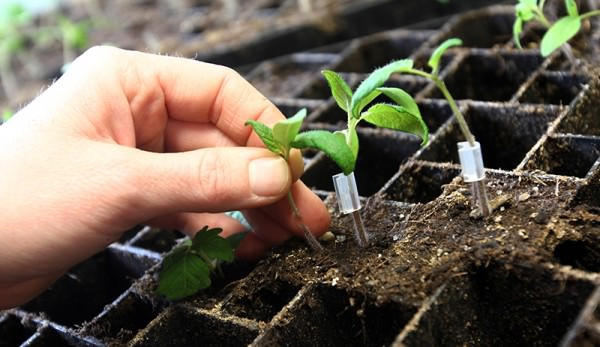 Grafting is a task most gardeners associate with trees, but there are numerous applications of this garden skill in working with herbaceous or annual plants. Chiefly, grafting is a viable way to gain more productivity with vegetables in the Solanaceae (or nightshade) family, which includes tomatoes, peppers, eggplants, potatoes and ground cherries.

Although it took years to find the right cultivars to make these interspecific unions productive, they can be imitated at home by using the same tried-and-true combinations of cultivars as those used in store-bought pre-grafted plants. Alternatively, you could experiment to find different dually productive combinations.

A few years ago, garden and environmental writer Anne Raver published a great article in The New York Times simply called â€śIn Defense of Grafting.â€ť In it, she describes a mode of using herbaceous grafts to make heirloom tomatoesâ€”which are prized for their flavors and textures but often plagued with pest and disease problemsâ€”more vigorous by grafting them to compatible hardier hybrid rootstocks.

Newer hybrids are often far more resistant to pathogens, like nematodes, and diseases, like verticillium wilt, but because theyâ€™re bred for hardiness, yield and shelf-life, they often donâ€™t offer the same culinary potential as heirlooms. A simple and elegant solution lies in combining the best characteristics of both plants with a graft.

How To Graft Nightshades

Nightshade plants, like tomatoes, are best grafted just after their first set of true leaves is established. The most reliable method is tube grafting, which is the use of a narrow silicone tube or clip to bring the tissues of stock and scion together. These tubes can be purchased online or from a garden center that sells more advanced propagation materials.

Approach or cleft grafting can also be used, especially when the plants are a little bit older. Approach graftingâ€”where the scion and stock are grown closely together, the stems are wounded and pressed together, and then the excess plant tissues are gradually severed after the graft is successfulâ€”works best for unions between tomatoes and potatoes.

Itâ€™s especially important to use sharp and sterile grafting implements in grafting herbaceous plants, as the more delicate green plant tissues can be easily crushed by a dull blade and wonâ€™t be able to form a vascular connection. Beyond that, newly grafted seedlings should be kept in a humid microclimate to minimize their water loss. After the grafts have healed, they can be transplanted out into the garden, and make either a conversation piece or a vigorous, tasty and disease-resistant supercrop.