Often confused with “sprouts,” microgreens only comprise the above-ground parts of the plant, rather than everything from root to shoot. 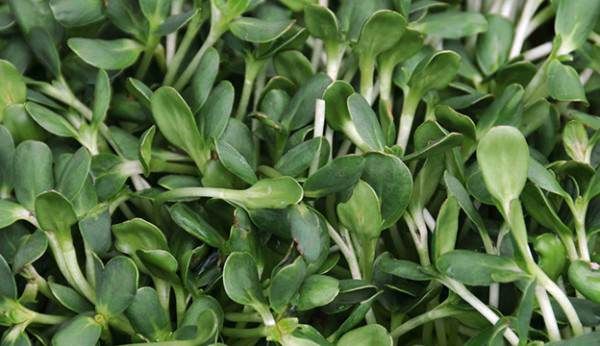 Microgreens are nutritionally dense and space-saving versions of common edible crops, that can easily be cultivated without soil in even the most primitive of windowsill gardens. Often confused with “sprouts,” microgreens only comprise the above-ground parts of the plant, rather than everything from root to shoot. They are harvested one to two weeks after sowing, rather than after a few days, and are sown on a growing substrate.

Like sprouts, microgreens are eaten while in the early stages of a plant’s growth, but unlike sprouts, they have time and opportunity to take up nutrients from their substrate; thus, they can pack a more impressive nutritional and fibre punch. A study of 25 commercially available microgreens showed that when compared to mature leaves of the same plants, microgreens had significantly elevated levels of phytonutrients like carotenoids, ascorbic acids, and other assorted vitamins and antioxidants.

Cress is a common favorite microgreen selection, as it’s rich in aromatic compounds. However, everything from lettuce to red cabbage, cilantro, amaranth, sunflowers and daikon radish can be grown as a tiny-but-tasty leafy addition to a meal.

Conventionally, microgreens are grown in a thin bed of potting soil or hydroponically in a pellet of substrate (like peat), but with a little bit of liquid fertilizer, they can be sprouted and grown on a mixture of vermiculite and perlite or even on a few layers of paper towel.

Because microgreens can provide a habitat for bacteria like E. coli to proliferate, going soil-free when growing them adds an extra dimension of sterility. Boiling water can be used to sterilize a soil-free growth medium before sowing seeds. The plants should, however, still be carefully washed before consumption.

Provided the liquid fertilizer input is calibrated correctly, however, microgreens grown without soil can be a hassle and mess-free way to cultivate a small space, like a kitchen window, and get a maximal nutritional return on a minimal investment.