While your diseased trees are dormant is the best time to prune them and give them a healthy start to the new year. 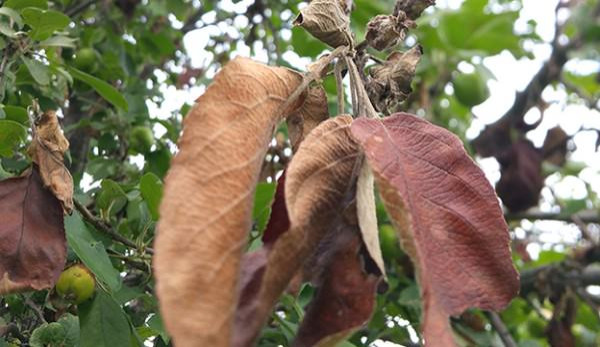 Winter is the perfect time to think about pruning trees and shrubs, especially those that have been hit with disease during the growing season.

A common bacterial disease of pome fruitsâ€”including pears quince, apples, hawthorns and serviceberriesâ€”is fire blight. This bacterial disease makes both branch and foliage look as if they have been burned, and young trees or new growth are especially vulnerable to infection and severe damage. Older trees can live with the disease but with reduced productivity.

Fire blight is spread by pollinators like honeybees, which transmit the pathogenic Erwinia amylovara bacteria between blossoms. These bacteria move from the fruit spurs, through the vascular tissues of the tree, forming reddish-brown streaks under the bark as they move toward the roots. The bacteria form cankers, which are lesions that become active in spring as the tree comes out of dormancy. The lesions drip bacteria-laden sap down to the soil.

The only way to get rid of fire blight is to prune out affected branches and destroy them, preferably by burning, so as not to spread bacteria into the compost or mulch pile and risk spreading it to more plants. Marking affected branches in autumn makes winter pruning easier: Blighted limbs are hyper-visible when they have blackened leaves hanging off of them, and cankers can also be identified in winter, with their telltale burnt appearance on the bark.

Affected branches should be pruned until no more reddish-brown streaks are visible, with a few extra inches pruned off for good measure. Sometimes this entails removing an entire limb.

Winter is an excellent time to prune out this disease, as the pathogen is as dormant as the tree. As always, use clean equipment and sterilize between cuts. Taking care of fire blight in the dormant season will reward you with healthy new growth in spring.