Reduce your irrigation needs during warm, dry spells with this ancient watering technique. 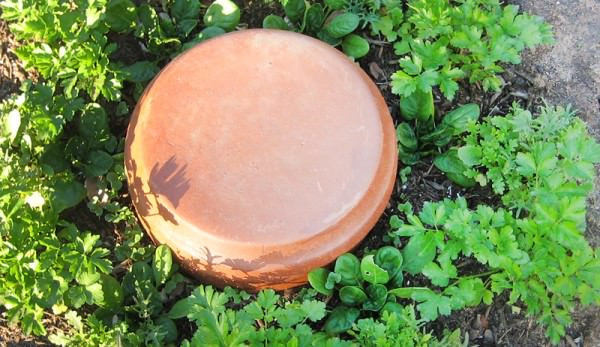 In the thick of warm and dry spells, it can be challenging to not only keep the garden watered but to keep it watered deeply enough to encourage adequate root penetration. This is especially true for gardeners growing irrigation-dependent non-native plants, which is most of us. Often, a surface watering on dry soil will evaporate before ever penetrating the lower soil layers.

There are a number of things that can help keep plants sufficiently hydrated during especially arid warm spells. Mulch, for example, can help keep the soil cooler, as well as hold in soil moisture. Beyond a simple top-dressing of organic matter, however, thereâ€™s a sub-soil, slow-release irrigation solution thatâ€™s easy and cheap to install and can save both time and water: buried unglazed and covered clay vessels filled with water, called ollas.

Operating on a simple principle of osmosis, unglazed clay vessels will slowly diffuse water into the surrounding unsaturated soil. Whether these vessels be simple flower pots, traditional ollas, or even the terra-cotta plant nanny doesn’t matter too much. What counts is that they deliver a constant supply of water to the root zone, thus reducing surface evaporation and the likelihood of acute water stress for the plants nearby. Larger buried olla vessels may only need to be filled once a week, for example, which means that the plants surrounding the olla are taken care of for the entire time there is water in the reservoir.

Mary Kathryn Dunston, owner ofÂ Dripping Springs Ollas, says that ollas can save up to 70 percent in water use, compared to watering aboveground. Also, because ollas water below ground level, the weed seeds arenâ€™t watered, and the root base of the plants around the olla grow larger, producing a healthier plant.

â€śThe garden olla is an ancient clay pot irrigation system that has proven itself worthy for thousands of years,â€ť she says. For gardeners in colder climates, some ollas are strong enough to be left in the ground year-round,â€ť she says. â€śIf you have too much rain, the water will go back into a near empty olla after a deluge and decrease up to 80 percent the splitting of succulent foods, such as melons and tomatoes.”

A 2.9-gallon olla can water out up to a 4-foot circle, depending on soil, mulch and how many plants are around the olla.

“Ollas save timeâ€”as they need filling one or two times a weekâ€”they save money on water; and there is less worry. Even in the driest months, you know your plants are getting adequate water,â€ť she says.

Installing underground clay vessel irrigation couldnâ€™t be simpler. Dig an area about two or three times as large as the vessel, completely cover the edges and sides soil. Be sure not to bury it too deep, thoughâ€”the vessels require an opening available above the soil where you can fill them with water.

After burying, plant your most water-demanding crops around the vessel, and they will benefit from having a cool and constant supply of below-ground moisture.