UF Hack: Use Copper Tools In The Garden

Give your plants a modest boost of the nutrient copper simply by employing some stylish garden tools. 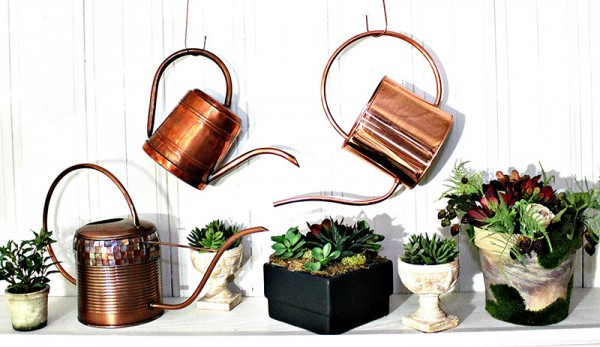 Copper tools, sculptures and tapeâ€”here are a lot of garden products that use this malleable elemental metal. So what does all of it actually do for a garden?

Often heralded as a sort of natural or passive slug and snail repellent, copper in the form of tape on pots and rings around plants are purported to chemically and electrically deter gastropods from munching on plants. However, Robert Pavlis, who curates the blog “Garden Myths,â€ť says the effectiveness of these toolsÂ is overstated. Itâ€™s certainly a mild dissuasion, but a determined pest can safely cross its barrier. So even thoughÂ copper isn’t exactly a panacea for the prevention of slimy invaders, itÂ does have other important roles to play in cultivation.

In the form of the salt copper (II) sulfate, it’s used as a fungicide. A mixture of this inorganic compound with lime, called the â€śBordeaux mixture,â€ť was developed in 1882 and has long been used as a foliar spray on grapes. Mixed with ammonium carbonite, itâ€™s called â€śCheshunt compoundâ€ť and is used to prevent damping-off in seedlings.

But itsÂ pest-killing qualities arenâ€™t limited to the fungicidal: Itâ€™s antimicrobial, as well.

Perhaps most importantly, though, copper is an essential soil and plant nutrientâ€”one that is often under-appreciated until it isnâ€™t there in sufficient quantities. Without adequate supplies, plantsÂ look like they have frost damage, with wilting, browning, and delayed flowering or even sterility.

However, donâ€™t go applying copper fungicides and soil amendments willy-nilly. Too much in your soil is hard to fix. Because itâ€™s non-soluble and remains in the soil for years, it will essentially be toxic for plants and other organisms. Ideally, it should beÂ present in the soil at levels of 10 to 30 parts per million (ppm), and soil can be tested to see if more should be addedÂ for optimal plant growth.

Austrian scientist Viktor Schauberger demonstrated that simply using copper tools in the garden can benefit plant growth. The trace amounts of this soft metal that end up in the soil are enough to give a boost without overwhelming the soil.

Essentially, this mineralÂ is a double-edged sword: Itâ€™s both essential and potentially poisonous. It all depends on both how and how much itâ€™s used.