The color genetics of chicken feathers can seem mystifying, especially when a blue-black-splash bird hatches. Here's a breakdown of how it happens. 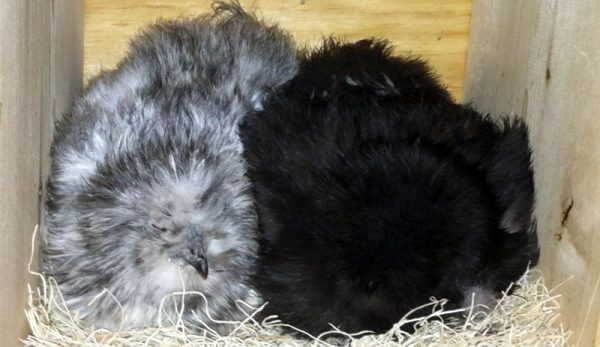 A couple of weeks ago, I received a rather alarmed text from my friend Rose, who keeps a small flock of chickens in Idaho. “WHERE’D HE COME FROM??!!!!!”read the message.

It was accompanied by a photo of a a quintet of fluffy babies, perhaps 3 days old at the most. Amongst the adorable black peeps stood one oddball: a slate-blue fluff. Rose had purchased a half dozen hatching eggs to incubate from a neighbor who supposedly only raised black chickens.

“Is he an albino?” she asked, baffled by the little blue baby.

Thus was Rose introduced to the ofttimes mystifying world of poultry color genetics, where blue, white, and lavender can come from black; where black can come from blue; and where enthusiasts speak in strange notations such as (Bl/bl+), (Pg), and (Co).

While the average backyard chicken-keeper is usually not looking for a lesson in genetics, having a basic knowledge of poultry color genetics is a valuable tool as it can help plan out a beautiful variety of birds or assist in producing specific chicks for sale.

On our farm, we focus on blue-black-splash (BBS) birds. This allows for a variety of colors in our flock without risking a muddled mix that might result should a buff rooster cover a black hen.

Get to know the Silkie chicken breed!

All You Need to Know About Genes

A gene is a section of DNA that carries the blueprint for such traits as color. Austrian scientist Gregor Mendel discovered the keys to hereditary traits through his studies in the mid-1800s.

Mendel’s Laws of Inheritance state that genes occur in pairs and that each parent contributes one gene to that pair. That gene pair determines how the hereditary trait manifests in the offspring.

Side note: This is how people end up with the AB blood type.

In poultry genetics, both black (BB) and white (WW) are dominant. So breeding a black rooster with a white hen would result in a black-and-white chicken.

In color genetics, the genetic code Bb represents blue while the genetic code for black is BB. The ‘b’ comes from splash (genetic code bb). Splash coloration in chickens manifests as a white or very muted grey (in other words, black) ‘splashed’ with irregular splotches of black or blue.

Splash chickens are beautiful, eye-catching birds and are often in high demand. I once had a customer who repeatedly asked to buy a dozen splash chicks … which is not as easy to breed as it sounds.

These four ornamental chicken breeds add some wow factor to the flock.

When it comes to breeding for Blue Black Splash, gender does not matter. These colors are not sex linked.

The rooster and hen can be any of these three colors. What does matter is which colors the parent birds are, though. This will determine the percentage of the blue-black-splash coloring in the chicks:

As it turned out, Rose’s egg seller did have a blue hen in his flock. This, then, explains how the mystery fluff appeared in her incubator.

Not that she minds. She plans on getting more hatching eggs from her neighbor with the hopes of hatching more blues that, down the line, may someday yield splash chicks.