Keep the peace among members of your flock by understanding your chickens’ pecking order and the behaviors that go with it. 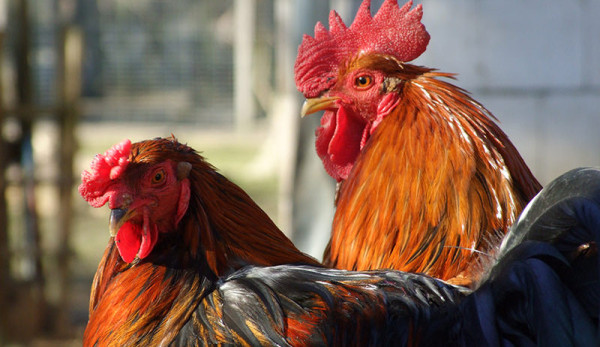 So many of our common idioms come from the social hierarchy of the chicken pecking order: We call a leader someone who “rules the roost,” and someone who has been reprimanded as having been “henpecked.” But as chicken keepers, how well do we know this intricate and complex social structure that our birds live and navigate every day?

It behooves you to get to know your animals as individuals, if possible, and as social creatures in general. The more we know about how our birds’ lives are structured, the better keepers we can be.

The Importance of Pecking Order

A flock is a social group of chickens, and the structure they use to organize themselves is commonly called a pecking order. Each and every member of the flock falls somewhere on the spectrum of dominance, and none are left out. The most dominant birds are higher in the pecking order and receive privileges, such as choice nesting boxes, first access to food and water, and mating rights. Submissive birds naturally fall lower on the pecking order. The hierarchy of a flock of chickens is fluid and can change as birds age or die or are removed, born or otherwise added to the flock.

In a mixed-gender flock, the males will typically vie for the top spot, which is commonly called the alpha. If there is only one rooster in a flock of hens, he will likely take the dominant position if he has reached sexual maturity. Flocks with more than one male will often see consistent battles between the cocks for dominance, unless they’re given more space, more hens or flocks of their own.

On average, one rooster can adequately watch over, care for and mate with a flock of between 10 to 15 hens. In larger flocks with several roosters—think 30-plus birds—males will naturally create their own smaller flocks within the larger group and will typically leave other males alone.

In a group composed exclusively of hens, one dominant female will establish herself as the alpha in the absence of a cockerel. It’s not unusual to notice several distinctly dominant females in the second and third positions, as well. Younger birds are typically lower in the hierarchy, and older or more aggressive birds will rise to the top. As pullets mature, they move their way up in the pecking order as some birds age and die—or are culled, processed or removed.

As with any animal social structure, being the alpha hen or rooster has some advantages. Those ranked highest in the pecking order have first choice on food, access to the feeder and water fountain, first dibs on the best treats and favorite nesting boxes, and preferred dust bathing spots, just to name a few. Dominant chickens routinely remind the more submissive birds where they rank in the hierarchy by giving warning growls, steely glares and the occasional peck.

To the untrained eye, these may look like cruel acts, but don’t worry: These behaviors are actually gentle reminders of each bird’s place. Maintaining the pecking order can sometimes appear rude and unforgiving. Some chicken keepers feel compelled to remove or coddle the lowest ranking birds—and I’ll admit, I’ve been drawn to the underdogs myself—but it’s important to remember that a balanced pecking order is necessary for truly harmonious living. When each bird knows where it stands in the order, the whole flock is content. Plus, if you were to remove the lowest-ranking bird, the next bird up the hierarchy would simply take its place at the bottom of the order. Someone always has to bring up the rear.

In the loosest definition, cannibalistic chicken behaviors include picking at or pecking other birds’ various body parts with the aggressor’s beak. These behaviors range from very mild (a few pecks as a reminder of social status, as mentioned earlier) to severe, resulting in irreparable injury and death. Egg eating is also considered cannibalistic and certainly a frustratingly bad habit for the chicken keeper to deal with, but it doesn’t compromise the safety and health of a flock as other cannibalistic behaviors do.

Thankfully, severe cannibalistic behaviors are not to be expected in a vigorous, socially healthy chicken flock. With spacious living quarters that are devoid of harsh, artificial lighting and abundant in fresh air and sunlight; ample calcium supplements, food and water supplies; and clean housing, cannibalistic behaviors will be reduced, if not eliminated entirely.

Despite your best efforts, you might notice some cannibalistic behaviors in the wake of a predator attack, the introduction of new hens or the removal of older birds. Whatever the case, if you see cannibalism in action, it’s critically important that you take it very seriously.

Chickens are ruthless about maintaining a strong social structure—after all, any weak, ill or injured birds will slow down the rest, making the entire flock a target for predation or the spread of disease. To humans, cannibalistic behavior can seem pretty callous, but these behaviors are their means for survival. It’s only when conditions are inadequate that cannibalism can turn deadly. If you see or suspect cannibalistic behaviors in your flock, take action immediately. Investigate the situation and determine the source: Is a hen injured or ill and now being targeted? Are the chickens bored? Is the coop too small? Are newcomers struggling to integrate? Remedy the situation by determining the cause of cannibalism.

As a chicken keeper, your first priority is to set the stage for a peaceful flock environment. That might not be your intention, but creating coop and housing space with the following requirements will keep social structure clean and honest and the chicken drama to a minimum.

Be intentional about how and when you introduce new chickens to an existing flock. Every time a bird joins or leaves a flock, the pecking order is reestablished. Frequent additions or subtractions can leave the birds stressed from all the shuffling, which may in turn lead to cannibalism.

This article appeared in the November/December 2015 issue of Chickens.