Keeping sheep is rewarding, and learning to understand how the animals see (and smell and hear) the world can help you better manage your flock. 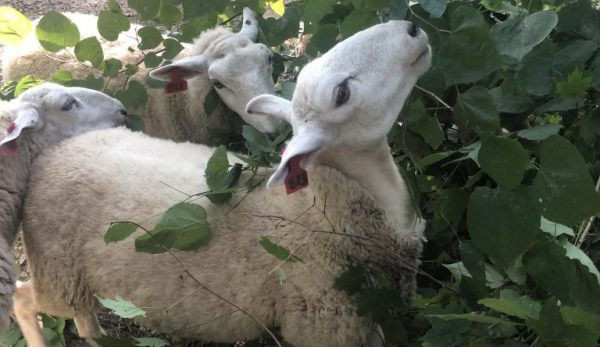 When we got a bottle ewe lamb from a friend this spring, we raised her in the house. She was too small and weak to live out in the cold March winds. By the time I put her out in a small pen with some other spring lambs, she was very attached to me. It was a hard few days for me while she became adjusted to the other sheep, but it happened.

However, every time I went out into the pasture to add hay to the feeders or check on water, Lamby would come running when she noticed me with ecstatic â€śMa!â€ť sounds.

I began to notice, though, that she didnâ€™t always see me right away. But when I called her name, she immediately turned her head in my direction and galloped toward me.

I began to wonder about how well sheep could see (and hear, smell and taste), so I did a bit of research. What I found out helped me understand my flock just a little bit better.

Considering sheep? They can be the perfect livestock for many small farms.

As it turns out, sheep donâ€™t have the greatest vision. But their eyesight is best when their heads are down grazing.

You may notice that your sheepâ€™s eyes are set on the side of its head. That allows them to be able to see all around them when they are grazing, with peripheral vision up to 300 degrees! But sheep also have pretty bad depth perception and cannot see directly in front of their noses.

Another interesting fact for sheep owners is that if you approach a sheep from directly behind, it also wonâ€™t be able to see you. So, make sure to talk softly if you find yourself directly behind one.

When I walked out into the pasture and realized Lamby didnâ€™t see me, I should not have been surprised that calling her name would give her a huge clue her favorite human was there.

Sheep have excellent hearing, and they depend on it to make up for their less-than-stellar vision.

Like many animals, sheep have a far greater range of hearing than us humans, which is a good thing for an animal subject to predators. They can even turn their ears about individually to be able to hone in on specific sounds, just like wooly antennae!

Keep in mind that loud and high-pitched noises are not welcome to sheep.

Unfortunately, even out in the country, some folks on our road start celebrating the Fourth of July a little early. When we moved our flock to a pasture during the day nearer the road, we found they were very unsettled after some nearby firecrackers had gone off.

We started to bring them in earlier than we might normally for a whileâ€”before the neighbors start celebrating.

Here are some others ways livestock animals use their senses.

Sheep have an amazing sense of smell. And this is exactly what they need to be able to smell different predators or distinguish between different types of feed and pasture plants.

My husband and I watched with great interest when we let our flock into a small pasture that had new grass and other green plants growing early this summer. We noticed a couple of the ewes smelling each leaf carefully before taking a bite.

Rams use their keen sense of smell to find ewes in heat. And mama ewes can tell which lamb is hers simply by the smellâ€”first from the amniotic fluid and then by the smell of her milk on the lamb.

According to Storeyâ€™s Guide to Raising Sheep, the sense of taste and touch are the least important to sheep. Their sense of taste is pretty much what ours is: a way of telling if the food they are going to eat is good or not.

When you see your sheep grazing in the pasture, you may notice that they will go for certain plants first because … well, they taste good.

It probably is not surprising to find out that touch is not a keen sense for sheep. Their wool or hair donâ€™t really give a lot of opportunity for touching.

Lambs and ewes do look for body contact as an important part of bonding. And a lamb will snuggle up to its mother at night.

The most frequent type of touching a sheep does is with their nose. Watch your sheep when they see something new. They will stretch their neck out to smell the object and then, if all seems well, touch it with the nose.

I found out about the nose-touching habit with Lamby. As she grew bigger and began to run aroundâ€”first in our backyard and then in the pastureâ€”she would often turn back to check in with me. As I bent over to pet her, she would touch my nose with hers, probably much like a lamb would do to its mother.

By understanding the way my sheep react to the world through sense, I feel as if I am more in tune with my own flock. Thatâ€™s a feeling I really like!