What’s The Deal With Those Unsolicited Seed Packages?

Increasing numbers of Americans are receiving mislabeled, international mailers containing seed packages they didn't order. Here's what to know and how to respond if you receive one. 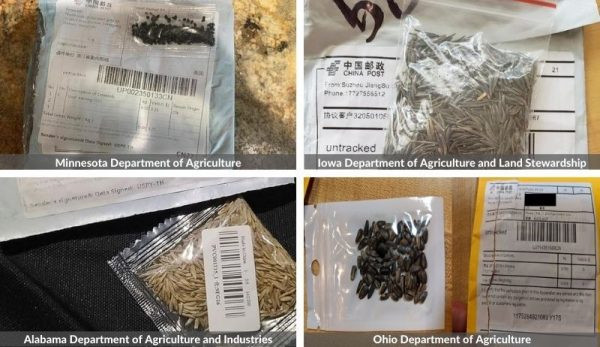 Good things don’t always come in small packages—especially when those packages come to your home unsolicited. Marked as containing specific jewelry items, small toys or even earbuds, hundreds of seed packages are hitting doorsteps across the U.S.

Precisely what they contain and why they’ve been sent is still a puzzle.

“We don’t know exactly what is going on, but people are reporting that they’re getting packages containing seeds that they did not order,” explains Dr. Kevin Ong, a plant pathologist with Texas A&M AgriLife Extension Service. Ong also directs the Texas Plant Disease Diagnostic Laboratory in College Station, Texas.

Ong initially saw news reports the seed packages arriving in Washington state and Virginia late last week. “My understanding is that folks in Utah have had reports of this from the past two weeks or so,” he adds.

More recently, Texans began getting the tiny parcels, too. In fact, as of this week, at least 27 states have alerted residents to be on the lookout for the unsolicited seed packages. Now, people in Arizona, California, Illinois, Indiana, Louisiana, Kansas, Kentucky, South Carolina and Tennessee, among others, claim to have received the mysterious mailers.

Unsolicited seeds have also been sent to Canada, Australia and the EU.

The international mailers often feature Chinese characters, and, although most of the packages seem to come from China, some other countries of origin have included Serbia, Kyrgyzstan, Uzbekistan and Malaysia.

“USPS recently found some packages of seeds with address labels suggesting they were sent from China,” Wenbin commented. “After verification with China Post, those address labels turned out to be fake ones with erroneous layouts and entries. China Post has contacted USPS, asking it to send those fake packages to China for investigation.”

Besides establishing just who is sending the seed packages, state and federal officials will also need to determine what kinds of seeds have been sent.

Many of the seeds appear to be those of vegetables or herbs. To date, the Plant Protection program of USDA’s Animal and Plant Health Inspection Service (APHIS) has identified 14 seed species. They include mustard, cabbage, morning glory, mint, sage, rosemary, lavender, hibiscus and roses.

“This is just a subset of the samples we’ve collected so far,” says Deputy Administrator for Plant Protection Osama El-Lissy.

“The state Department of Agriculture and USDA are doing their due diligence to check it out and take some precautions,” Ong says. “On the biology side, if the seeds are, let’s say, weed seeds or, worst case, noxious weed seeds that may or may not exist in the U.S., they can cause detrimental effects to our ecosystem.”

If there are some problem plants in the mix, they could wreak havoc on our farms and food supply.

“We’ve got some great examples from history,” Ong says. “Think about the 1920s and 1930s and the story of kudzu in the South. It was brought in to help prevent erosion and guess what happened? It took over and basically did a lot of economic damage.”

That’s also true for the tropical soda apple in Florida.

“That accidentally showed up in Florida I think in the ’90s,” he says. “It’s a shrubby, thorny bush that’s hard to get rid of with herbicides. So, for a farmer, that’s problematic.”

The coronavirus pandemic has led to an unprecedented demand for seeds.

USDA-APHIS is investigating the mailings, noting, “At this time, we don’t have any evidence indicating this is something other than a ‘brushing scam’ where people receive unsolicited items from a seller who then posts false customer reviews to boost sales.”

Because seeds are small and lightweight, they are relatively inexpensive to ship. And demand for seeds has increased markedly in response to COVID-19. Whether the packages are part of a massive scam or something more nefarious remains to be seen.

In the meantime, the USDA is working to collect and test the mystery seeds.

So, what if you receive unsolicited seeds? Don’t plant them. Don’t toss them. And don’t attempt to destroy them.

Instead, put them back in their packaging, place the whole thing in a resealable baggie, and wash your hands. Then, call USDA’s Smuggling Interdiction and Trade Compliance Program at 1-800-877-3835 or email SITC.Mail@aphis.usda.gov. You should also contact your state regulatory official or plant health director.