This urban chef makes farm-fresh food for people on the go. 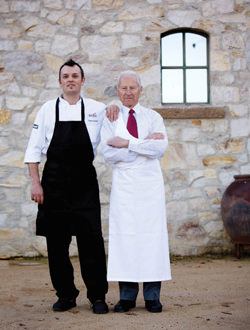 Chef RoliRoti learned to cook from his father who was a Swiss master butcher.

When you think of grabbing fast food from a â€śroach coachâ€ť along a city sidewalk, you probably donâ€™t expect organic and locally sourced foods. For those people who want to satisfy their grumbling stomachs as well as their local-food sensibilities, though, chef and â€śrotisseurâ€ť Thomas Odermatt offers his RoliRoti mobile rotisserie.

Serving only sustainably farmed meats and in-season, local produce, RoliRoti has been feeding farmersâ€™ market goers and catering parties in the San Francisco area since 2002. By serving the farmersâ€™ market audience, Odermatt is already positioned in front of people who appreciate his businessâ€™s values and are seeking out â€śsimple comfort foods.â€ť

Odermatt grew up in the Swiss Alps and learned farming and cooking from his father, Otto, a Swiss metzgermeister (master butcher), and his mother, Maria, whose spice rub he still uses for seasoning RoliRotiâ€™s grilled chicken.

â€śMy father had a farm that we silently operated [non-certified] organically. I went into the study of farming. … I can walk into a field at a farm, and when [farmers] talk about the soil structure, about the problems they have, I can relate and sometimes even give advice,â€ť Odermatt says. â€śThat has brought me where I am now and why I believe we should consume local, sustainable and, if possible, organic ingredients.â€ť

Throughout the summer, as much as 95 percent of the ingredients offered by RoliRoti are organic. During the winter months, donâ€™t expect to find tomatoes or cucumbers on the menu, because theyâ€™re not grown locally that time of year.