Photo by Audrey Pavia A goldfinch outside my office window proves the beauty of urban wildlife. When I hear people who live in rural areas talk about their wildlife sightings, I feel pangs of envy. They have deer grazing in their backyards. They have a family of raccoons that visit the back porch every night. […] 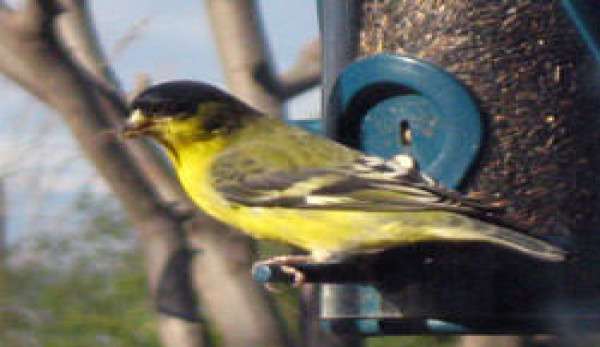 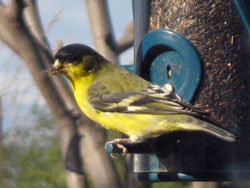 A goldfinch outside my office window proves the beauty of urban wildlife.

When I hear people who live in rural areas talk about their wildlife sightings, I feel pangs of envy. They have deer grazing in their backyards. They have a family of raccoons that visit the back porch every night. They have a golden eagle nesting in their tree behind the barn. It just drives me crazy.

While I love the convenience of living in an urban area â€” I’m 50 miles from L.A. and minutes from lots of big stores and restaurants â€” I do long for the feeling of being in nature. Itâ€™s something rural farmers take for granted, and itâ€™s something I pine for.

So I try to appreciate the wild critters we do have around here. They donâ€™t often show themselves, but when they do, it’s glorious.

Take for example this past weekend: Two days ago, I was walking back to the house after feeding the chickens when something bright caught my eye. I stopped and saw a rufous hummingbird drinking from an agave flower near my kitchen window. This particular species of hummingbird is pretty uncommon around here. They pass through the area when migrating from the northern part of the U.S. down to Mexico. Some of them stay around if flood is plentiful, but itâ€™s rare to see them. Itâ€™s too bad, because they are truly stunning. This one amazed me with its iridescent orange feathers glinting in the sun. I stood and watched as he drank from the flower, his feathers shimmering in the light as he flitted about.

Later that day, while sitting in my office, I was treated to a flock ofÂ goldfinches that descended on a bird feeder I had placed outside my window. Because the area where I lived is semi-arid, most of our local birds are dull in color, their feathers designed to blend into the dry scenery. But not these goldfinches, whose bright-yellow breast feathers contrasted with their slate-gray-and-white markings. They chirped and chattered while they pecked away at the thistle seed Iâ€™d put in the feeder. I sat and watched them for a good 20 minutes before I tore myself away and got back to work.

And then, last night came the best wildlife encounter of the weekend. It was after dusk, and I was ridingÂ Milagro down the trail. I had just crossed the street from my house when a coyote began calling from the hills just a couple of blocks away. His yelps made my heart pump harder; the wildness in his voice was so exciting. Milagro turned his head and pricked his ears in the direction where the calls were coming from, also intrigued by the sound.

The coyoteâ€™s howling ended quickly, and soon I was passing a neighbor’s house on the trail. My neighbor was standing outside on the driveway.

â€śDid you hear the coyote?â€ť he said to me, clearly as excited as I was about it.

It was then that I realized the coyoteâ€™s voice was more than just a sign of the wilderness adjacent to our urban community. It was also a great gift.