In the first zone additions since 1990, the USDA plant hardiness zone map provides more detail and accuracy thanks to advances in recordkeeping strategies. 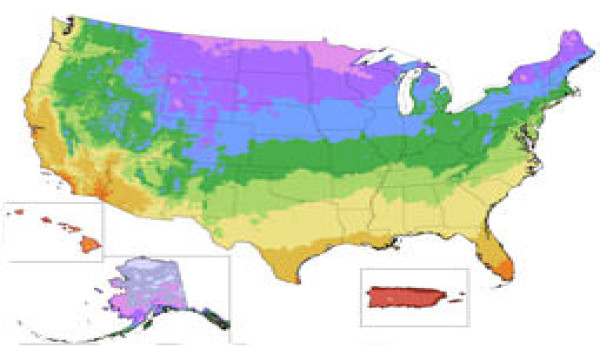 The USDA last week released the new version of its plant hardiness zone map, updating a tool that hobby farmers and gardeners have relied on to determine crop varieties and planting times. The new mapâ€”jointly developed by USDA’s Agricultural Research Service and Oregon State University’s PRISM Climate Groupâ€”contains the first zone addtions since 1990 and provides greater accuracy and detail for its users.

For the first time, the new map offers a Geographic Information System-based interactive format and is specifically designed to be Internet-friendly. The map website also incorporates a function that allows farmers to find their zone by ZIP code. Static images of national, regional and state maps have also been included to ensure the map is readily accessible to those who lack broadband Internet access.

“This is the most sophisticated plant hardiness zone map yet for the United States,” says Catherine Woteki, PhD, USDAâ€™s under secretary for research, education and economics. “The increases in accuracy and detail that this map represents will be extremely useful for gardeners and researchers.”

To help develop the new map, USDA and OSU requested that horticultural and climatic experts review the zones in their geographic area, and trial versions of the new map were revised, based on their expert input.

Compared to the 1990 version, zone boundaries in this edition of the map have shifted in many areas. The new map is generally one 5-degree F half-zone warmer than the previous map throughout much of the United States. This is mostly a result of using temperature data from a longer and more recent time period. The new map uses data measured at weather stations during the 30-year period of 1976 to 2005. In contrast, the 1990 map was based on temperature data from only a 13-year period of 1974 to 1986.

Some of the changes in the zones, however, are a result of new, more sophisticated methods for mapping zones between weather stations. These include algorithms that considered for the first time such factors as changes in elevation, nearness to large bodies of water and position on the terrain, such as valley bottoms and ridge tops. Also, the new map used temperature data from many more stations than the 1990 map. These advances greatly improved the accuracy and detail of the map, especially in mountainous regions of the western United States. In some cases, advances resulted in changes to the cooler zones.