Poultry enthusiasts can order the 2011 Backyard Biosecurity calendar for tips on keeping their flocks healthy. 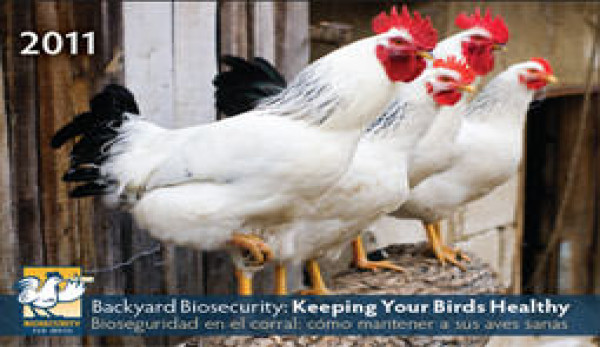 Once again, the USDA will be releasing itsÂ Backyard Biosecurity calendar for bird enthusiasts. The 2011 calendar features colorfulÂ chickens and turkeys, as well asÂ ducks andÂ geese among a 12-month spread of domestic, wild and exotic birds.

Each month, the Biosecurity For Birds mascot, Healthy Harry, will dole out advice to bird lovers about how to care for their flock and keep flocks free from disease. He notes early detection is important to prevent the spread of disease, and gives poultry owners easy steps to observe and report illness and to protect their flocks. He also advises owners to keep themselves, their clothes and equipment clean, and to restrict access to their property and birds. The calendar has information on spotting the signs of a sick bird and photos of birds with avian influenza, a disease that can strike poultry quickly.

Raising backyard poultry is a growing trend across America as many individuals and families seek a more direct connection to their food. And as the number of backyard chickens increases, so does the need for owners to learn about keeping their flock healthy.

The Biosecurity For Birds campaign started in 2004 following the outbreak of deadly exoticÂ Newcastle disease in 2002 to 2003. It began in a backyard flock and cost state and federal governments more than $160 million to eradicate in California and other western states, making it one of the largest animal-disease outbreaks in the United States in 30 years.

Visit theÂ Biosecurity for Birds website to order a free 2011 calendar and get more information on caring for poultry.