Use Buckwheat As A Summer Cover Crop

The pretty blooms of buckwheat add a nice cover crop to unused portions of your summer vegetable garden. 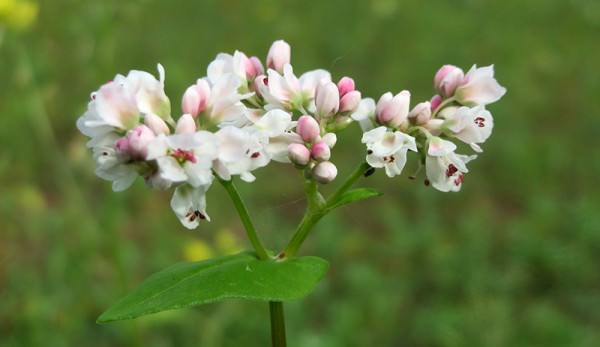 One of the prettiest plants in the garden isnâ€™t a vegetable. Itâ€™s the summer cover crop buckwheatâ€”which isnâ€™t really a wheat either.

Buckwheat (Fagopyrum esculentum) is considered a pseudo-grain or fruit seed, and is related to plants like sorrel and rhubarb. The seeds, called â€śgroats,â€ť can be eaten as a hot cereal or ground for flour, which is commonly served as buckwheat pancakes, soba noodles or galettes. Yet another bonus: The flowers are fragrant and produce a strong nectar that bees make into a dark, sought-after, summertime honey.

But letâ€™s talk about buckwheat as a cover crop: Itâ€™s a great one. It germinates in hot weather, is drought-resistant and heat-tolerant, attracts pollinators, suppresses weeds, matures quickly and will grow in infertile soil.

I rotate buckwheat into my garden after cool-season crops, such as broccoli or snap peas, have finished in the late spring. It will mature through the hot weather of summer and can be tilled in before your fall plantings.

Buckwheat has medium-sized seeds, landing somewhere between the smallness of lettuce seeds and the bigness of corn, beans and squash seeds. Seed size tells you how deep to plant: Tiny seeds, such as lettuce, need sunshine to germinate and want to be at the surface or barely covered. Big seeds want to germinate in the dark about the depth of three times their thicknessâ€”or about the depth of your first finger joint. Buckwheat wants something in between, which can be accomplished by broadcasting the seed on the surface and lightly pushing the soil around with a gravel rake or seed harrow.

Buckwheat shrugs off the heat of early summer, sends deep roots to find moisture and spreads its wide, heart-shaped leaves quickly to shade out many weeds. And it looks a flowering meadow while doing it.

Youâ€™ll want to mow the buckwheat about a week or two after the first flowering, before it sets its seeds, so that it doesnâ€™t become a weed itself. The 2- to 4-foot-tall stalks can be left on the ground as a mulch, slowly releasing nutrients into the soil and further helping to suppress weeds, or it can be tilled in to release nutrients more quickly. Even if left as a mulch, you can go ahead and transplant your fall crop right into the residue.