Use Caution When Moving Farm Machinery In Spring

After the spring thaw, tractors and loaded wagons can become stuck and cause problems—even on ground that appears to be dry. 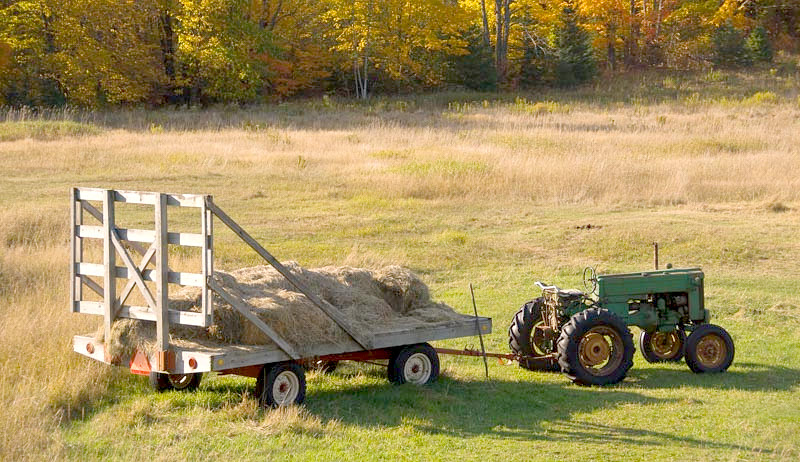 Spring is the perfect time of year for getting a head start on summer projects. For those few short weeks between the departure of snow and the arrival of spring growth, you can get a lot accomplished if you work hard and take advantage of good weather. But while many projects are perfect for spring, be careful while moving farm machinery and heavy wagons in the weeks after the spring thaw. When the ground is soft and wet, it’s easy to leave deep ruts that damage the ground and are difficult to clean up or repair. Even worse, the equipment might get stuck, creating an even larger mess.

Areas with standing water are the most obvious places to avoid, but any low spot can be susceptible to wet conditions—even if they appear dry at first glance. This was never clearer to me than it was a few springs ago.

The year was 2014. Eager to get started cleaning up some pine trees that had fallen down the previous year, I started loading the debris onto a large hay wagon. Bit by bit, I sawed the trees into pieces and piled them on the wagon, including large branches and many sections of the trunk. By the time the process was complete, the load was quite heavy, but the ground had been drying out nicely and appeared perfectly suitable for supporting a wagonload of tree debris.

Truth be told, the ground was dry enough to accommodate the farm machinery—except for one area on the edge of a field that was slightly lower than the surrounding terrain. It was here—even though the ground appeared dry at first glance—that the wagon suddenly bogged down, sinking into the ground by several inches and becoming thoroughly stuck in the mud.

The tractor—it was a John Deere Model 40 named “Little Mo”—was slipping in the mud as well, unable to gain enough traction to pull the wagon to drier ground. Because the wagon wasn’t immediately needed for any other purpose, the most logical plan was to unhitch the wagon and leave it until the ground was drier and Little Mo could gain more traction.

Even when the ground was dry, it took a bit of effort to pull the wagon to safety. After unloading the heavy trunk sections to lighten the load, it was necessary to raise the wagon with a jack to place wooden boards underneath the stuck wheels, giving them a clear path out of the ruts they had dug in the ground. Only then could Little Mo pull the wagon away and (finally!) transport the tree debris to its final location.

Three years later, you’d never know it happened. After filling in the ruts with dirt, grass quickly moved in to colonize the bare spots. No evidence remains that a large wagon was once stuck in the field.

But I haven’t forgotten. In fact, you might say I’m overly cautious now, reluctant to move heavy wagons until I’m certain that the spring melt water has been thoroughly absorbed and the ground is dry once again.

After all, that particularly troublesome section of ground looked dry. But the situation demonstrates the old saying: Appearances can be deceiving!