Use Pigs To Improve Your Soil & Landscape

Want to change your landscape? Pigs will happily root up soil, clear invasive plants and more to bring new life to old fields and pastures. 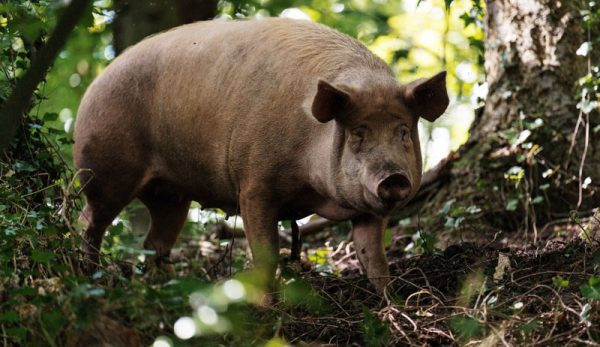 There can be lots of debate around the pros and cons of keeping pigs on pasture. Some folks say they’re too hard on turf, while some swear their own breed doesn’t root. But you’ll find there is little argument when it comes to using pigs for deliberate landscape alteration.Â

Pig pressure is a fast way to make some real changes to the topography. And you can do so without the expense and trouble of bringing in earth-moving equipment.Â

Take plowing, for example.Â John Seymour was a well-known pioneer of homesteading in the mid-1900s. He considered the pig the best garden-site preparation tool known to man.Â

Fence your piggies on the proposed garden plot, throw down some shell corn (he called it “Indian corn”), and stand back! Watch the animals plow up sod, dig out roots and grubs, and turn up rocks and buried trash ready for removal.Â

A season of pig pressure, and the garden site is ready.

And for a fast change in ground covers, bring in a pigâ€”or a whole herd of them!Â Jake of Broken Aspen Farm in Pennsylvania used his pastured porkers to convert a field overgrown with pokeweed into nutritious pig pasture.Â

Pokeweed can be toxic, but pigs are smart about what they eat. Jake’s herd wiped out the giant weed while maintaining perfect health.

Prickly invasives like multiflora rose can be a real trick for the homesteader to fight without large, expensive equipment.Â Bring on the pigs, though, and see how fast they’ll dig out these deep-rooted briars. They eagerly make room for recovering native and naturalized pasture species.

One way to increase pigs’ impact on a chosen piece of ground is to plant forage crops, then let the pigs do their own harvesting. How about a crop of roots like turnips, mangel-wurzels (fodder beets), Jerusalem artichokes or daikon radishes?

Their long taproots will puncture the subsoil, followed by rooting pig snouts. Thus, you could net an improvement of soil tilth as well as a harvest of bacon.Â

A planting of beans or peanuts will keep pigs busy in one spot for an extended period of fertility-boosting. And a dense cover crop of buckwheat, followed by grazing pigs, goes a long way to wipe out invasive weeds like wild carrot and Canada thistle.

Things to Keep in Mind

When using pigs for landscape alteration, there are some important points that must be borne in mind, though.Â

Topography is significant. On a steep slope, any large-scale change in ground covers may cause unintended erosion problems. Bare soil washes away. Whole hillsides may become unstable when their anchoring roots are destroyed. Â

Likewise, soil composition should be taken into consideration when you are thinking of using pigs for earth moving or significant landscape changes. While a loamy or sandy soil can absorb pig pressure without damage, a clay soil may be so compacted that it takes years of rest to recover.Â

In fact, one way to seal up a dug pond is to pen some pigs on it for a time and let them wallow. So stay aware of your own farm’s individual characteristics, and make sure your choices are appropriate.

Pigs aren’t just walking bacon. They’re powerful dirt-movers, potential partners for many farm-building projects. What’s the use of leaving some of our best tools in the barn?Â

Next time you have an earth-moving project, maybe you need to fire up your pig!

On homesteading pioneer John Seymour’s friable British soil, pigs could be kept in the same place for an entire year. They turned the soil, eating slugs, grubs, and perennial weeds. All the while, they added their own valuable contributions of fertility in the form of manure and urine.Â

In the spring he moved the animals to a new site and planted his garden.Â

Today, we’d probably plant a good cover crop or green manure and “rest” the soil for a season before planting food crops. In this way, we avoid the possibility of passing parasites from pigs to humans.