The number and types of worms present in your garden over time can tell you a lot about your soil. Here's how you can start taking worm counts. 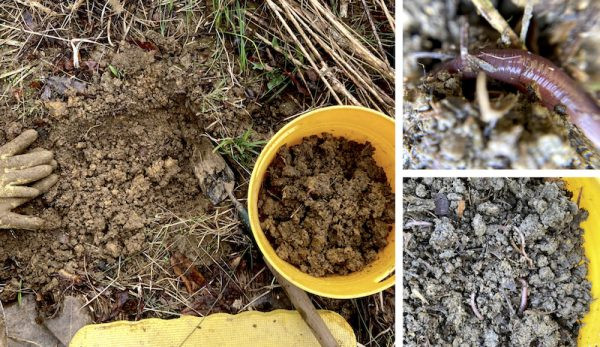 Christina Curell has spent literally hundreds of hours searching through soil samples on the lookout for worms. â€śI sat on a bucket for two weeks one summer to count worms,â€ť she recalls. â€śI was up there from sunup to sundown…. I hauled my water, hauled my soil, and I found two worms in an entire week.â€ť

Just two worms? â€śThis was a research plot and the soil that I was in was not conducive to worms,â€ť she explains. Curell works as the Cover Crop and Soil Health Educator for Michigan State University Extension.

When they’re at work in your garden, worms can boost the soil’s fertility, structure, and its ability to hold moisture. Of course, there are several variables that affect whether your soil is chock full or nearly devoid of worms.

â€śIt all depends on where you’re at, the temperature, the time of year, the soil typeâ€”the variables are huge,â€ť Curell says. â€śSo, what I normally tell people is to just go and look for worms.â€ť

Just what should you be looking for exactly when you do worm counts? â€śThere are lots of species of worms, and we tend to lump them together,â€ť Curell says. Put simply, there are a few basic groups of wormsâ€”epigeic, endogeic and anecic.

Turn over the damp mulch or leaf litter in a perennial bed and you may come across some surface-dwelling worms. These small worms are in the â€śepigeicâ€ť group. They stay up top, chewing through rotting leaves and other debris.

Red worms fall into this category. â€śThe red worms are the ones that we really like,â€ť Curell says. â€śThey’re the workhorses. They’re kind of small and they’re native.â€ť

Some kinds of epigeic worms also live in cooler compost piles and vermicomposting bins. These worms are experts at breaking down the organic matter found above ground.

When you dig down into the top layer of your soil, you might expose some soil-dwelling or â€śendogeicâ€ť worms. These are usually larger and paler than the epigeic worms. (In fact, some are so pale that you can see any soil they’ve recently eaten.) They make a series of horizontal tunnels as they move through the soil’s top layers.

This, in turn, can help to improve soil structure.

Finally, when you dig down farther still, you reach the realm of the â€śanecicâ€ť worms. These are large, deep-diving nightcrawlers. Working as nature’s tillers, they pull fallen leaves and other surface debris down with them into their vertical burrows. (They’ll even shred spent cornstalks to take back with them as they return to the cool, moist environs they prefer.)

When taking a worm count, Curell usually digs an 18-by-18-inch area in relatively moist soil. â€śWe want to go to a couple of depths when we do this,â€ť she says. â€śJust go down 3 to 6 inches and count the worms… Then go down the next 6 inches and count. Then go a little bit deeper.â€ť

She continues, â€śWorms are really good about moving, so, if you don’t [count within] those little increments, they’ll be gone.â€ť Put the dirt you remove in a large bucket or wheelbarrow as you go. Count the worms you see in each layer, total your numbers, and then replace the worms and soil.

Record your results along with the temperature, date and notes on the exact location of your count. Complete additional worm counts in the same spot annually to gauge soil health and improvement. â€śMake sure that you’re actually testing at the same time of year and that [soil] moisture and temperature are consistent,â€ť Curell recommends.

Read more: Air and water are critical to soil health.

So, what if you find very few wormsâ€”or no worms at all? â€ś[Taking a worm count] is a fun way of checking for soil health, but it’s not the end all and be all of soil health,â€ť she says. â€śEspecially depending on your soil typeâ€”if you’ve got drier soil … you’re not going to find them. They don’t live in droughty soils.â€ť

â€śOr if you have really, really heavy soilâ€”like heavy clayâ€”they’re not going to be there either,â€ť she continues. â€śThey can’t live in that, because they need air and, also, they need to move. So, it all just depends on your soil type.â€ť

What if your soil is neither droughty nor clay-heavy and you think you should be seeing higher worm counts? Add manure and plant more cover crops.

â€śOne of the things about worms is that they need food,â€ť Curell says. â€ś[Worms are] eating all of those bacteria and fungi that live around the plant roots. . . . So, the more plants that we can get into the system, the more worms we’re going to have.â€ť