Use Your ATV To Erect Farm Fencing

Lift the burden of doing fence-maintenance chores by letting your all-terrain vehicle do the heavy lifting. 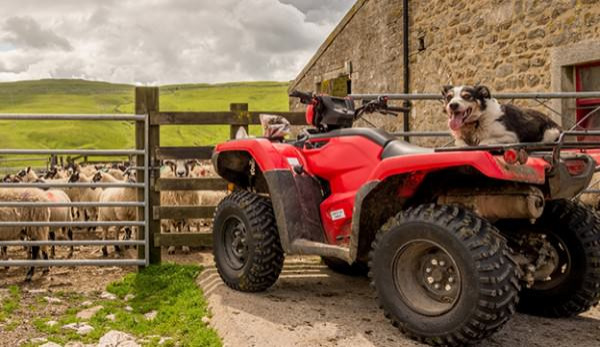 If you have spent any amount of time working with fences, you know they require a lot of time and effort to construct, as well as a lot of attention and maintenance to remain in working order. Inclement weather, bored livestock and the passing of time can unite to deteriorate your fences.

If you‚Äôve constructed large pastures with a lot of fencing, you know that erecting a fence can be a difficult and time-consuming task, and you also know that making repairs and keeping your fencing in good shape can be equally challenging. And if the size and shape of your pastures requires you to haul fence-fixing supplies for half a mile just to make a repair, the task can be even harder.

Fortunately, all-terrain vehicles (ATVs) can make it much easier to build and fix fences. These small utilitarian vehicles have a lot of uses around the farm and are particularly well-suited to assisting with fence construction and repair. Here are a few tips and tricks to get you started.

When it comes to fences that have already been built, in many cases, damage can be easy to repair if it‚Äôs caught and addressed sooner rather than later. For example, if your horses are chewing a fence post out of boredom, noticing it quickly and adding supports to the post is a much simpler solution than replacing the entire post after it‚Äôs been chewed in half.

For that reason, it‚Äôs good to make a habit of traveling the perimeter of your pastures every so often to look for damage. An ATV can make this task easy, speeding up the process of patrolling the pastures, and freeing up time to work on your other farm projects.

Let The ATV Carry The Load

For simple fence repairs, you might only need a hammer and a few nails, but for larger repairs‚ÄĒsuch as replacing a damaged fence post‚ÄĒyou might need a large set of supplies ranging from a new fence post to a digging bar, shovel, extra dirt, electric drill, screws, hammer and more. Rather than attempt to carry all of the required tools yourself‚ÄĒsomething I have done on occasion!‚ÄĒit‚Äôs much easier (and less tiresome) to let your ATV do the job.

If your ATV has a bed or compartment in the back for carrying tools, you can hop aboard and drive out to the farthest corners of your pastures to make repairs. For the more in-depth repairs that require new posts or large tools, a trailer is a must-have addition to your collection of ATV implements. With a trailer‚ÄĒparticularly a trailer with an open back for carrying extra-long posts‚ÄĒyou can easily haul large loads of equipment and supplies, even carrying multiple fence posts so that you can replace several at once.

When it comes to building new fences, ATVs are even more useful. For these projects, an ATV with a trailer can be an essential tool, allowing you to carry enough supplies for several hours of uninterrupted work. And in the event that you run out of nails while working 1/4 mile from your tool shed, or if you need to go back for a different shovel, an ATV can speed you up and get you back to work sooner.

Along similar lines, if you‚Äôre putting up wire fencing, why not let your ATV do the unwinding? Rear-mounted ATV wire unrollers can be used to unwind multiple spools of wire as you drive along, making it much faster and easier to string the wires and secure them in place.

The most difficult aspect of erecting a new fence is digging the holes for the posts, but fortunately, ATVs can assist with this task, as well. While you might not be able to add a post-hole digging auger to your ATV‚Äôs arsenal of attachments, it is possible to purchase a stand-alone auger with its own engine, which you can then tow to and from the fencing site using your ATV .

You‚Äôll also discover that when digging fence post holes, the amount of dirt you remove from the ground is rarely enough to fill the hole again, even once the post has been added. Dealing with this illogical mystery means bringing along extra dirt to pack into the hole and secure your fence posts firmly in place. An ATV with a trailer is perfect for hauling large amounts of soil to the fencing site.

Depending on the individual fencing project, you may discover many more ways that ATVs can ease and speed up the process‚ÄĒan ATV with a three-point hitch could help pull a damaged fence post out of the ground‚ÄĒbut in any case, once you start using an ATV to help with your fencing projects, you‚Äôll soon wonder how you ever got along without it.

One reply on “Use Your ATV To Erect Farm Fencing”