Using Your Splitting Maul For More Than Chopping Wood

The best tools on the farm are tools that have multiple uses—the splitting maul is one of those tools. 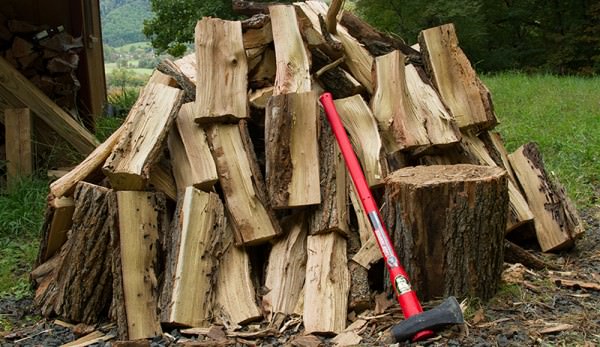 Those of us who depend on firewood to get through the winter are deeply familiar with the splitting maul. This long-handled, 6- to 8-pound tool for splitting firewood spends much of its time hanging out by the chopping block. However, I’m not only going to express my affection for this somewhat underappreciated tool, I’m going to argue that it’s underused. Sure, the splitting maul can make quick work of turning a log into firewood, but when needed, it can also be used in several different areas around the farmstead.

The maul also has a thick, heavy blade—although, blade might not be quite the right word for it. One side is a flat sledgehammer; the other side is a somewhat dull, steel, bladelike object. The dullness is key: It’s what makes the splitting maul an exceptional device for separating the fibers of wood. It forces the log apart without—for the most part—getting stuck like a sharp axe would. However, that dullness and that sledgehammer are also what give the splitting maul its versatility as a farm tool, because unlike the axe, you don’t have to worry as much about damaging the edge. It can take it; blunt is sort of its thing.

Of course, it probably makes sense to tackle the intended use of the splitting maul before moving on to its more unique applications. Traditionally, the splitting maul is meant for splitting firewood: A woodstove-sized log is set on a chopping block, and the maul is swung over the shoulder or head, downward, striking the log on the grain—where the log is beginning to split—forcing the wood apart. (If you want to save yourself future back trouble, place the log in a rubber tire so that when you split it, each piece still stays relatively upright and easy to pick up).

The sledgehammer side of the maul is traditionally meant to be used in conjunction with a splitting wedge for tougher, knottier logs. The wedge is essentially a steel spike that is lightly tapped into the log and then with increasing force to push it through. There is definitely some nuance to splitting wood, but much of it involves simply practicing, building both the muscle and the muscle memory.

The splitting maul’s general proximity to the woodlot makes it a convenient tool in a pinch—sometimes, literally. Almost all loggers run into a situation in which they want to fell a tree in a direction the tree may not necessarily want to go.

Typically, they’ll take a number of precautions—as they should—to prevent the tree from falling any unwanted direction and trapping their chainsaw, and one of those precautions is the use of a wedge.

A wedge is a small, generally plastic, object that resembles a thin pie slice. It’s forced inside the back cut with a hammer or minisledge to ensure the tree won’t pinch the chainsaw or fall back on the feller. But a 6-pound splitting maul can be just as handy to gently drive the wedge into the tree and keep it from pinching your saw.

One can also, in certain circumstances and with a longer wedge, slightly force a tree in the direction it may not want to fall. A few good taps on the wedge with the flat side of the maul and the tree should topple over nicely.

Of course, you should never force a tree any direction it can’t go; if it’s leaning heavily in one direction, it’s not going to go the other direction. No splitting maul and wedge combo can change fate. But if your splitting maul is closer to your woodlot than your minisledge, or you don’t have enough uses for a minisledge to own one, the splitting maul makes a nice substitute.

The splitting maul isn’t quite as strong as a standard sledgehammer, nor as heavy or as broad, but it isn’t that far off. It’s more like a minisledge with a slightly longer handle. And where you would typically use a minisledge—dislodging something, perhaps, deconstruction or tapping a board into place—the flat side of the maul can come in handy.

Say you quickly want to pound some wooden stakes in the ground. The splitting maul, held at mid-handle, tapped on the top of the stake, can provide the requisite force to get your stake into the ground without much extra energy or an unnecessary trip to find another tool. I say this having just quickly set up a small, five-minute fence to keep our chickens out of our strawberries using tobacco stakes and a 6-pound splitting maul. The splitting maul is that kind of tool.

Tool abuse occurs when you use the wrong tool for the wrong job. Sometimes in farming, however, you have to use the closest tool available to be efficient. So if you find yourself tamping down mole tunnels in the yard, or even using the splitting maul as a tamping bar to firm in a fence post, don’t feel guilty. The splitting maul is built for a little abuse. It doesn’t need to stay particularly sharp. It doesn’t need to be babied. For those reasons, you should be able to find several more uses for it.