Vaccination data can be hard to obtain, and many vaccines are designed and packaged for large, commercial operations. Here are basic facts. 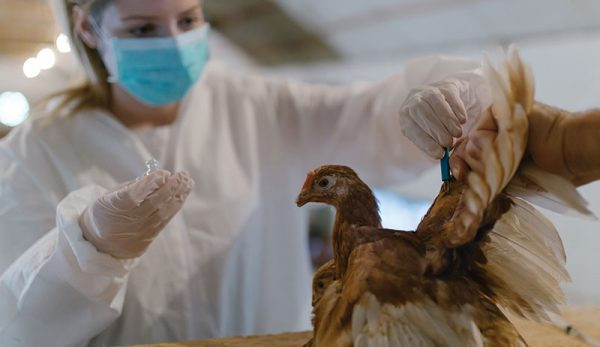 In the internet age, finding accurate information about backyard poultry can be challenging. To that point, getting information about chicken vaccination can be even more difficult because owners have so many questions, such as what vaccines to use, how often to use them and how should they be given.

Another problem: Poultry vaccines were developed, designed and packaged for commercial poultry production (which is to say, farms with thousands of birds). Consequently, scaling becomes an issue. For example, the smallest bottles of vaccines can be for 1,000 or more hens, making them difficult to use in a typical backyard flock.

Vaccines are complicated because they donâ€™t work 100 percent of the time, which can lead to skepticism about their usefulness. Psychologically, we remember a vaccine failure (â€śWe gave our chicken a vaccine, but the chicken got the diseaseâ€ť) more than all the times that vaccinated birds did not get the disease. To that point, in medicine as in life, nothing works 100 percent of the time.

When you vaccinate, youâ€™re essentially producing a mild form of the disease in order to elicit an immune response. However, the vaccine strain is purposely a mild form as opposed to a virulent form that can cause disease and death.

The big picture is that vaccines do not cause disease. If, for example, your chicken is vaccinated against Marekâ€™s disease and the chicken later gets Marekâ€™s disease, there are various proven reasons this occurred. These include human error, mismatch between the vaccine strain and the strain that the birds were exposed to, and improper vaccine protocol (such as the birds were not vaccinated at 1 day of age).

So what poultry diseases should you have your chickens are vaccinated against?

Marekâ€™s is a highly contagious viral disease that affects poultry worldwide. Itâ€™s thought to be the most common cause of death in backyard poultry in the United States. Marekâ€™s can manifest itself in several ways including tumors, paralysis, weight loss and death.

Because there is no treatment for Marekâ€™s, the only way to combat the disease is prevention. Vaccinating your flock and removing feather danderâ€”where the virus can be present in high concentrationsâ€”to reduce the viral load in the environment are keys to prevention.

Vaccination of Marekâ€™s constitutes an outstanding example of successful disease control in veterinary medicine. However, because the virus is so ubiquitous in the environment (infection of chicks can occur almost immediately after hatching), the ideal times for vaccination are in ovo administration on the 18th day of incubation or by subcutaneous administration of vaccine at 1 day of age.

For backyard operations that produce chicks, the lyophilized herpesvirus of turkey vaccine, also called HVT vaccine, can be easily purchased from feed stores reconstituted and given under the skin at 1 day of age. This is the most common Marekâ€™s vaccine available for backyard poultry-
keepers. While this is the only viable vaccine option for backyard owners who hatch their own eggs, unfortunately the HVT vaccine is considered the least effective vaccine for the control of Marekâ€™s because it does not offer protection against the more virulent strains of the virus.

Regardless of vaccine status, itâ€™s essential to place 1-day-old chicks in houses that have been thoroughly decontaminated to allow vaccinated birds time to develop immunity, which typically takes two weeks. Therefore, when you bring new birds into your coop, remove feather dander that can carry virus in order to reduce the load of virus in the environment.

Follow the instructions that come with the vaccine to dilute it. At day 1 of age, tent the skin on the chickenâ€™s back and pierce through the skin. Make sure to avoid any bones; use a 20-gauge needle and a 1-milliliter syringe.

Dry pox is a highly contagious viral disease that affects poultry worldwide. While mortality rates are low, a drop in egg production, appetite and weight are typically seen.

Dry pox is usually observed by owners as tiny pink scabs, typically around 1 millimeter, or similar lesions across the comb, wattles, eyelids and other nonfeathered portions of the chickenâ€™s body. The lesions typically start as small blisters and progress to wartlike nodules that later become dry scabs. Over the course two to four weeks, the birds will typically recover with little or no mortality in the flock.

If you have a flock that has been previously affected by avian pox or if a neighboring flock has been affected, then preventative vaccination is a reasonable approach toward controlling future outbreaks. In addition, because the disease typically spreads very slowly, you can vaccinate the unaffected birds during an outbreak. However, never vaccinate a bird that is sick.

If pox has been demonstrated in your area, consider vaccinating your flock annually, ideally in the spring or summer in order to generate a strong immune response for the fall and winter, which are typically when avian pox is most common. To get adequate coverage against the different strains of the virus, consider using the fowl and pigeon pox vaccines, which can be mixed together and given in one application. The vaccine is not always available to backyard poultry-keepers. Contact your veterinarian or feed store to see whether itâ€™s available.

Avian pox is a relatively common disease in many environments. Focus on the simple things first, such as mosquito control, as the virus can be spread by these insects. Also, ask your neighbors whether they have had avian pox in their flocks and then consider vaccination whether it makes sense.

The wing-stick method of vaccination is used via a two-needle applicator, which is typically provided when you purchase the vaccine. You can vaccinate your flock starting at 1 day of age with some of the attenuated vaccines; however, in most cases, wait until 4 weeks of age with a follow-up booster vaccine given approximately 1 month before egg production starts. Vaccinated birds should be examined for â€śvaccination takesâ€ť (an area of swelling and scab formation at the injection site) 7 to 10 days after vaccination. Look for this to ensure that the vaccine produced the â€śvaccination take.â€ť Revaccination should be considered if there is no â€śtake.â€ť

Always vaccinate against Marekâ€™s disease or purchase chicks that are already vaccinated against it, and consider vaccinating against pox based on presence of the disease in your flock or neighboring flocks. Other vaccines that are used in the commercial poultry industry, while efficacious, arenâ€™t practical in backyard settings and are not recommended.

Most importantly, realize that vaccines, like biosecurity, is a tool and not a cure-all toward disease control. Stick to the basics of disease control, biosecurity, proper husbandry and appropriate vaccination, and your flock should remain relatively healthy.

Maurice Pitesky is a faculty member at University of California School of Veterinary Medicine-Cooperative Extension with an appointment in poultry health and food safety epidemiology. Dr. Pitesky earned his B.S. in biology from UCLA, and his DVM and MPVM from UC Davis. Pitesky is also boarded in Preventative Veterinary Medicine (DACVPM). Piteskyâ€™s research interests are focused in mapping of avian diseases, food safety epidemiology and in gaining a better understanding of small scale poultry production with respect to environmental sustainability, poultry health and food safety.