Has a sudden snowstorm left you dairlyless? Cozy up with a latte made from the almond milk stashed away in your pantry. 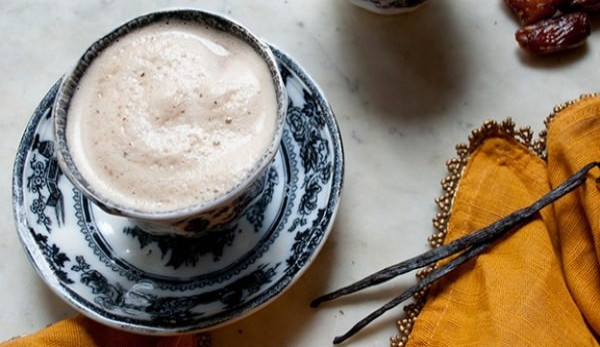 Perhaps even a year ago, I was the person making a fuss about nut milk. Iâ€™ve always loved it on its own but wasnâ€™t easily convinced it could never replace the rich creaminess of milk. Iâ€™ll have to bit my tongue, however, after a snowstorm prevented me from picking up milk to make a late-afternoon latte. A carton of almond milk was all I had, so thatâ€™s what I was going to use. A pot of espresso, a few dates and a dash of vanilla later, an almond-milk latte was born that I actually likedâ€”loved even!

Donâ€™t expect a milky sweetness in this latte. Thanks to dates and nutty almond milk, it has a grounded earthy flavor instead. If dates arenâ€™t your thing, leave them out and use honey as your sweetener. I strongly recommend a dash of cinnamon to go with it. You can make this drink with chilled espresso for a refreshing iced latte, too, though the colder weather makes a cozy latte a welcomed afternoon treat.

Combine the hot almond milk, espresso, vanilla extract and dates in a blender, and let sit 5 minutes until dates have softened. Blend on high until smooth and creamy. If using a high-powered blender this shouldnâ€™t be an issue, but if your blender leaves behind some larger pieces of dates, strain the liquid to remove them. Feel free to adjust the sweetness level with honey. Add a pinch of salt, and serve immediately.

Hali Bey Ramdene is a writer, photographer, and food editor of The Kitchn. She writes passionately and very infrequently about food and art history at her blog Dinner with Panofsky [http://www.dinnerwithpanofsky.com/] and resides in upstate New York. Follow her on Instagram: https://www.instagram.com/halibey/