Different from a draft, coop ventilation is needed year-round to keep your flock from getting sick or frostbitten. 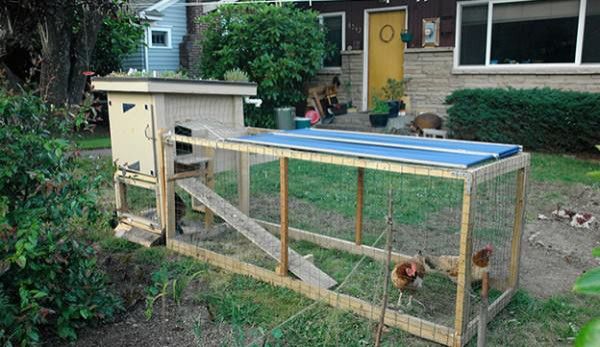 An extremely important element of successful chicken keeping is assuring that there is adequate ventilation in the chicken coop. Failing to plan for or provide sufficient airflow is a frequent mistake that poultry keepers make, and it can quickly lead to sick birds.

Why You You Should Ventilate

Beginning chicken keepers often believe that coops should be airtight and insulated, but nothing could be further from the truth. Providing plenty of ventilation keeps chickens healthy in a number of different ways:

A great deal of ammonia is released into the chicken coop from the droppings. According to Lisa Steele, author of Fresh Eggs Daily (St. Lynnâ€™s Press, 2013) and creator of the popular “Fresh Eggs Daily” blog, ammonia fumes can cause your flock everything from irritated eyes and sinuses to respiratory distress, overall poor health, or even death in extreme cases.

“Leaving ventilation up high in your coop, well above the level of your roosts, ensures that the ammonia fumes created by the chicken manure in your coop will escape and not be trapped inside,â€ť Steele says.

An easy way to check whether your coop ventilation adequately removes ammonia fumes is to check for ammonia smell. If you can detect ammonia near the coop floorâ€”at approximately the same height as your chickensâ€”then the coop airflow needs to be increased.

Chickens donâ€™t sweat, but they do generate a tremendous amount of water vapor by breathing and from their droppings. All that water vapor causes coops to be humid. High humidity makes chickens more susceptible to respiratory illness and frostbite. Good ventilation removes this dampness from the coop and reduces respiratory problems.

Chickens can withstand surprisingly cold temperatures if the coop air is dry, according to Janet Garman, former feed-store owner, farmer and author of Chickens from Scratch: Raising Your Own Chickens from Hatch to Egg Laying and Beyond (AuthorHouse, 2015).

“Frostbite occurs in the presence of sub-freezing temperatures and moisture,â€ť she says. “This moisture settles on the chickensâ€™ vulnerable combs, wattles and toes and is the perfect condition for frostbite to occur. Keeping the coop dry and well-ventilated will solve the problem of frostbite.â€ť

Chickens deplete oxygen in the coop quickly because they have high respiratory rates and produce large quantities of carbon dioxide. In order to get the oxygen they need to survive, the carbon dioxide-laden air must frequently be replaced by fresh oxygen-rich air.

Also because of their high respiratory rate, chickens are very susceptible to airborne diseases. Although they canâ€™t be seen, airborne disease organisms build up quickly in stagnant air inside the chicken coop and can cause an entire flock to become ill. Itâ€™s critical that these organisms be minimized by moving them out of the coop with fresh air.

Chickens are well-known for producing lots of dust, and all that dust in the confined space of a coop fills the air with dust particles. Because of their high respiratory rate and sensitive respiratory systems, all those dust particles need to be regularly removed from the coop to keep the flock healthy.

Because chickens donâ€™t sweat, they release their heat by breathing and are constantly adding heat to the coop. Chickens are better equipped to handle cold weather than hot weather and do best at temperatures below 75 degrees F. They really begin to suffer at temperatures above 90 degrees F, and can die from that high heat, so ventilation is needed to keep the coop cool, particularly during warm summer weather.

Some think that coops should be closed up during cold weather to keep the birds warm, but thatâ€™s not true. The coop needs ventilation year-round, though the amount and location of ventilation needed varies according to seasonal weather conditions.

Ventilation is different than a draft, Garman says. A draft blows air directly onto the chickens while they roost and should be avoided. Ventilation, on the other hand, allows air to rise naturally from a lower position to an exhaust opening or ridge. Ventilation will naturally carry away the heat and harmful substances that can lead to problems in your chickens.

“During the warm months, that might mean leaving the windows open completely and in cold weather, a smaller opening at the top of the window will provide a naturally rising air current,â€ť Garman says. “A roof vent or a small opening in the top of the coop or along the roofline will allow the gases to escape.â€ť

How Much To Ventilate

“The rule of thumb is to have one-fifth of your coop walls be windows or vents,â€ť Steele says. “The lower windows can be left open in the summer and then closed during the colder months, leaving only vents up high open.â€ť

If your climate is wet or the coop is crowded, then more than the recommended amount of ventilation will be needed. A fan may also be necessary, particularly in warmer climates, to provide an adequate flow of fresh air. A fan that can supply 5 cubic feet of air per minute per chicken in the coop will usually provide adequate ventilation.

There are many manufactured coops available for purchase, but that doesnâ€™t mean they have sufficient ventilation. It might be necessary to add additional openings for your conditions.

“In regards to adding ventilation openings, be sure to cover them adequately with hardware cloth that will keep predators from gaining access through any openings in the coop,â€ť Garman warns. “It comes in 1/4- and 1/2-inch varieties that are adequate for keeping out rodents and larger predators.â€ť

Obviously, the amount of ventilation needed varies depending on your location, climate, season, coop size and number of chickens. Knowing that your chickens always need good airflow and planning several ventilation options to accommodate them will go a long way to ensuring a healthy, happy flock. Keep that coop air moving!