Ventilation is good all year round, while drafts are bad especially in winter. Here's how to get your chickens the air they need, when they need it. 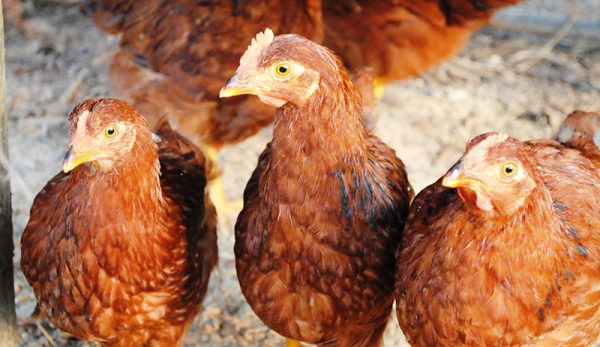 The most conflicted advice in poultry literature is to provide proper ventilation in the coop but without having any drafts. Most sources donāt explain the difference between the two, much less explain how to have one without the other. Letās change that.

Good ventilation removes ammonia and moist air from the coop all year long, as well as hot air in summer. This makes a healthier environment for the birds and alsoāyouāll like this partāextends the time between cleanouts by keeping the coopās air fresher.

A draft blowing over your birds on summer nights is a good thing, cooling their bodies at the hottest time of the year. On the other hand, drafts of cold air in winter suck the heat right out of your coop. Your birds will need to eat more food just to stay warm, and older birds mightĀ get sick and die.

So the problem is how to accomplish these conflicting goals that can change with the seasons. Wellāas you might guessāit depends.

Chickens have been surviving harsh winters in unheated and poorly constructed coops in northern climates in Europe and Asia for a few thousand years, so your hens will probablyĀ survive winter even in a badly designed and drafty coop if theyāre not subjected to long bouts of subzero temperatures. Chickens have a thick layer of feathers to keep them warm in winter, and their normal body temperature is higher than ours at about 106 degrees F. Plus, they will clump together on the roost in winter to share body heat.

My chickens do well all year round in zone 7 in North Carolina in a 5-by-5-foot coop with doors that donāt close tightly, hardware cloth covering 2 square feet of windows at roost height and chicken wire rolled up to cover 4-inch gaps between the rafters where they meet the top of the wall. Their coop has plenty of drafts blowing through it in any season, but theyāre none the worse for it.

Iād say that chickens will be fine where winters mostly stay above 10 degrees in winter with little effort required to restrict drafts. In colder areas, being able to close off drafts in winter will be beneficial for the older, weaker or more isolated birds. It might also save you a few dollars on feed. In this case, youāll want the option to have windows that close or that can be covered for the season with plastic sheeting or other material strong enough to block the wind. Be sure to close the windows about the time of your first killing frost to stop any cold drafts, and then open or uncover the windows when itās warm enough to plant early spring crops, such as peas, greens and potatoes.

Ammonia, moisture and hot air all tend to rise vertically in the coop. The point of coop ventilation is to get all three of them out. To do that, think of your coop as having three levels from top to bottom.

This is the space far above your birdsā heads. There should be plenty of ventilation here along the edges of the roof and in the gables, which are the triangular areas between the top of the walls and the roof.

Rather than covering the gables with lumber, only cover them with hardware cloth regardless of climate. Predators will be locked out, and the constant cross ventilation will draw out ammonia, moisture and hot air. Cut the hardware cloth an inch wider than the openings they cover and secure them with 3ā 4-inch fence staples.

You should also cover the gaps between the roof rafters at the point where they rest on the walls with more flexible chicken wire to keep predators out. This is best done before laying down the roof itself. Gaps like those between the rafters can be blocked with a small roll of chicken wire; secure the roll in place by running a couple of 3-inch screws through it but only going an inch deep into the wood. The exposed parts of the screws will keep the chicken wire from moving out of place. Because ammonia, moisture and hot air all rise, they can escape the coop through these roof-height openings.

Youāll find the roosting bars here. This zone can be from 12 to 48 inches above the floor. The roost level should have minimal drafts (aka horizontal air flow) in subzero winter areas. Any large openings at this level would create a cold, windy draft that would blow across the chickens and draw the warmth from their bodies.

Some hen keepers resolve this summer breezes and winter drafts conflict by installing operable windows, and this is a great height for them. Any product with moving parts is going to cost a bit more and take a bit more time to install, but in harsh winter regions, it mightĀ be worth it. In summer, when the windows are open, the chickens can enjoy a cooling breeze at night at roost level. In areas with milder winters, air flow at this middle roost level offers more of a benefit from summer breezes and little threat from winter drafts.

This typically is about 12 to 18 inches high and has three components: the floor, the pop door and possibly the nest boxes. With the pop door closed at night, there should be no drafts: Do not install windows or screens at this level. Unless youāre a precision carpenter, there will be slender gaps between the pieces of siding, the hatch to the nest box, the pop door and any people doors. Fresh air will be slowly sucked in through these small gaps as the spoiled air exits the ventilation near the roof.

While youāre checking over your coop for drafts, be sure that any gaps big enough for an egg-loving rat or snake to slip throughāan inch or soāare stuffed with a bit of chicken wire to keep predators out. We donāt want them enjoying the cozy conditions youāve created for you chickens.

This article originally appeared in the July/August 2017 issue of Chickens.