Worm towers placed right in the garden cut down on household waste by making it easy to compost your kitchen scraps and nourish your soil. 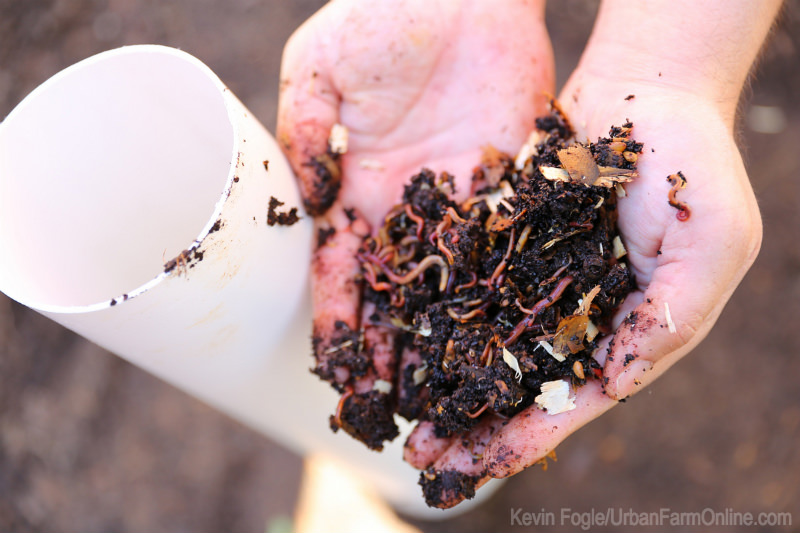 During South Carolinaâ€™s slower winter months, I like to get bunch of garden tasks started. One of my favorite projects is upgrading my small composting operation. Last winter, I built and installed a series of worm towers for my front-yard garden, which were a huge success this past growing season. For those of you unfamiliar with worm composting, aka vermicomposting, itâ€™s a process where you encourage introduced worms to consume your organic waste with a goal of utilizing their nutrient-rich waste to enhance your garden soil. This sought after waste is known as worm castings or worm manure and can be used as an effective organic fertilizer and soil conditioner.

The worm tower method relies on a series of small towers (usually made of modified 10-inch PVC pipe segments) placed throughout your gardens growing areas. Each tower functions as a subsurface feeder for worms who work to quickly break down your kitchen scraps. This unique type of vermicomposting is low cost, requires very little maintenance, and is typically free of the nuisance odors produced by many mainstream composting methods. By simply placing your kitchen scraps into the worm towers, you can easily dispose of your organic household waste while enhancing your soil.

Worm towers work best in areas where soil temperatures regularly stay above 30 degrees F, like in the South. In cooler climates, the worm towers will fail in the winter, so you may need to restart the towers every spring. However, even in warmer climates, the rate of composting will significantly slow down during the winter months.

The number of towers you need for your garden depends on its size. You should install one tower for every 30 to 40 square feet of growing area, making sure they are spaced evenly. Each tower will be needed to be started with about 50 worms, some worm bedding, and some starter organic scraps (do not compost meat or excessive amounts of citrus rinds, coffee grounds and eggshell).Â A quick Internet search for step-by-step worm tower construction plans will turn up several designs and instructions for creating worm bedding. Look for a worm tower design that utilizes screening or some other method to prevent flies from accessing the interior of the towers.

Everyday earthworms are not ideal for a tower vermicomposting setup. The best worms for vermicomposting are red worms (Eisenia fetida) also known as red wigglers, which you can buy in big-box pet stores or from online distributors.Â

If you are looking for an easy and efficient composting method, I highly recommend vermicomposting. It is a great choice for small scale urban gardens, especially those with neighbors who might complain about the odor issues commonly associated with traditional composting methods.