Louisiana-based backyard farm founder Katie Juan of Juan Hobby Farm tells us how self-sustainability runs in the family and introduces us to Versace, one special rooster. 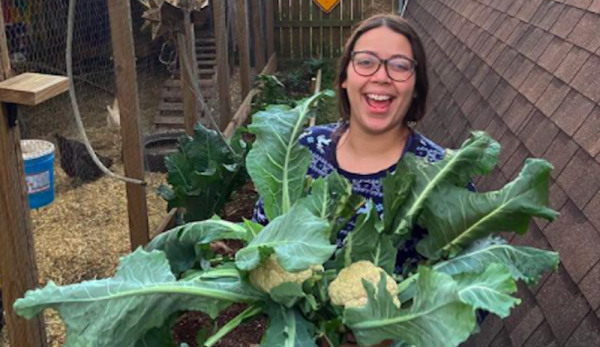 “As a child, my grandmother had a small farm with chickens and various other animals, which definitely sparked an interest in self sustainability,” says Katie Jaun, who runs the poultry-focussed Juan Hobby Farm in Saint Bernard, Louisiana. “I would get so excited to collect the eggs for breakfast and feed the chickens our scraps.”

After being exposed to a life filled with animals at an early age, Juan graduated to volunteering at local shelters. Later, she found a vocation in veterinary medicine, then founded Juan Hobby Farm.

“I have always been an animal lover. And for as long as I can remember I’ve been surrounded by, and cared for, a variety of different animals,” says Juan.

We spoke to Juan about living with poultry and farming through hurricanes. We also put the spotlight on a rooster named Versace.

“The biggest challenge we have overcome with backyard farming would have to be the force of Mother Nature,” says Juan. “Living in southern Louisiana, we have been through two major hurricanes, which brought with them pretty gnarly winds and heavy rains.”

In 2020, Hurricane Zeta passed through. The storm “crumpled the chicken run with her heavy winds and knocked down a large portion of our fence, which was less than ideal because we had just added our pig, Joel, to the farm.”

Zeta was followed by Hurricane Ida the same year. Juan, thankfully, was able to successfully evacuate the farm’s resident birds and avoid losing any animals.

“We had to do some pretty extensive clean up around the enclosures. And we had to fix downed fences, wires, roofing and general damages around the property,” Juan says. “We are still in the process of fixing the damages to our house.”

Each chicken on Juan Hobby Farm is known by name. “There are moments when it gets stressful and even heartbreaking having so many farm animals to care for. But it is just as rewarding,” says Juan.

“I have definitely stood in the middle of our yard surrounded by 40-plus poultry and a potbellied pig thinking to myself, ‘How did it come to this!’ or ‘What have I done?!'”

Balancing out the moments of stress, Juan says the farm has also transformed into “my place of solace on a bad day, companionship on a lonely day and laughs on days when I could barely muster up the courage to smile. I would not have it any other way.”

Versace is one of two roosters on Juan Hobby Farm. “He is so beautiful with some of his feathers like velvet. And he loves to call attention to himself,” says Juan. “He is a wonderful protector of the flock, but still gets chased around the yard by our male duck named Forrest. He has never been aggressive toward any person. It would be a travesty to not have him around.”

Beyond the poultry at Juan Hobby Farm, Juan says that gardening is becoming an increasing focus.

“In garden Zone 9a, we have a variety of options year round. So I started with hardy herbs, cucumbers and peppers that I knew would take off. But this fall I tried my hand at some cruciferous veggies that I had never grown like broccoli, cabbage and cauliflower along with kale and lettuce.”

Juan adds that the lettuce and kale is earmarked to feed the farm’s rabbits and poultry. “Our Pekin duck named Clementine is obsessed with fresh kale out of the garden.”

Last year, Juan Hobby Farm successfully grew cauliflower, even though Juan had doubts about how bountiful the crop would be. When it comes to utilizing the cruciferous globes, Juan recommends roasting them at 400 degrees for around 40 minutes covered with soy sauce and seasonings.

“We then cut it into vertical portions, almost like cuts of steak,” says Juan.

Daily Gifts as the Garden Grows

“Besides the enormous amount of eggs the girls gift us with daily, the most rewarding part about running this farm is the love that my wife, Rebecca, and I share by keeping everyone happy and healthy,” says Juan, reflecting on the joys of the farm. “Just being able to sit back and watch the animals and garden continue to grow and be happy is worth all the work and mistakes we’ve learned along the way.”