Join the many Americans showing their patriotism by re-creating their own victory gardens for modern times. Here's some history and pointers. 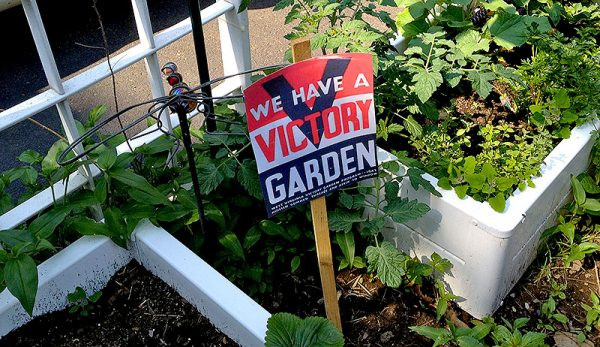 When you hear the word â€śpatriotic,â€ť what visions jump to mind? Flags waving? The colors red, white and blue? An Independence Day parade? What about fresh spinach greens and carrots ready to harvest right outside your kitchen doorâ€”or a bushel of potatoes stored in a basement root cellar, stockpiled for enjoying in the winter?

The victory gardens movement was born more than 60 years ago during the World War II era, connecting homegrown produce with homeland security. Back then, 60 percent of Americans actively gardened, harvesting more than 8 million tons of food per year.

Victory gardens were a home gardens that average families planted to reduce pressure on the public food supply that was brought on by the war efforts. Flash forward to today with our increasing fuel and food prices. The victory garden movement is experiencing a vibrant renaissance among enthusiastic home gardeners, revitalizing this patriotic call on new, modern, more personal terms.

â€śThere are various reasons for todayâ€™s revival of the victory garden,â€ť explains Rose Hayden-Smith, a leading victory garden historian and scholar at the University of California Cooperative Extension. â€śIn addition to tough economic times, people are increasingly concerned about the overall health of our food system and want to make a direct connection to where their food comes from. People also are looking for a return to community-based living; a time reminiscent of 1943, the peak of the victory gardens, when folks readily exchanged garden abundance and friendship with neighbors.â€ť

Most images of victory gardens bring to mind the government-led efforts of World War II. Victory gardens, however, actually started during World War I, thanks to citizen- and community-led initiatives.

â€śThe World War I victory garden movement focused on national security through growing food to increase local food production and consumption, freeing up food resources to help Europeans and American soldiers in need of food,â€ť says Hayden-Smith. â€śSeeing this positive public response to victory gardens, the United States government formally created a World War II initiative that focused on improving the health of the nation through homegrown produce as a role individual families could play to help the troops abroad.â€ť

Surrounded by inspiring posters and having access to informational publications distributed by the U.S. Department of Agriculture and companies such as International Harvester and Beech-Nut, Americans could readily find support and resources to start victory gardens.

“Planting a garden also served as a morale booster for Americans during World War II, as gardeners felt empowered by their contribution,â€ť adds Hayden-Smith.

These collective efforts prompted nearly 20 million Americans to plant victory gardens, which resulted in home gardeners producing about 40 percent of the vegetables consumed nationally. Citizens of other countries also shared this victory garden movement, particularly in Great Britain and Canada.

Despite such a vibrant gardening trend, the victory garden movement generally lost momentum when the troops came home.

â€śUnfortunately, many people associated victory gardens with deprivation and hard times during the war. They felt liberated to not need to garden anymore,â€ť explains Hayden-Smith. â€śThe decades after World War II brought economic prosperity to America, and with that, the rise of processed and convenience food, leading our nation even further away from home gardens.â€ť

This trend toward processed food led to a fundamental shift in our countryâ€™s agriculture base, from locally grown, fresh produce to corn-based fast food with high fructose corn syrup as a common ingredient.

Since the victory garden era, our nationâ€™s health has tremendously declined, in part because of our shift away from nutritious fruits and vegetables, resulting in the latest National Center for Health Statistics numbers showing more than 70 percent of Americans as overweight, obese or extremely obese. This revival of home gardening can play an important role in improving our nationâ€™s health.

The return to the victory garden spirit of self-sufficiency means hobby-farm gardeners today can tap into the World War II concepts for fresh tips on raising home produce.

The War Garden Victorious, by Charles Lathrop, first appeared in print in 1919 and is available free online today, providing a historic overview and how-to information.

Tips From the Victory Garden Era

Victory garden publications often recommended dehydration as a method of food preservation. Realizing this was before todayâ€™s energy-efficient home chest freezers, dehydration made economic sense, particularly during the World War I victory garden era when home-garden produce was often shipped overseas to the troops.

Dehydration is also an efficient storage option: It requires less space to store 10 pounds of dried tomatoes than if they were frozen whole.

These days, you can easily find online a variety of solar food-dehydrator building plans. For minimal material (much of which can be recycled scrap wood) and effort, you can tap into the sunâ€™s free solar energy to dehydrate food.

Dehydration is less labor-intensive than other food preservation methods, such as canning. No timing of hot water bathsâ€”just leave your cleaned, cut produce in the dehydrator on a sunny day and move on to other chores. Youâ€™ll return to a harvest of dried bounty.

If you enjoy camping, you can easily take your dehydrated, garden-fresh items with you into the backcountry. Just rehydrate with a little water and add to soups, stews and other cooked dishes.

Whatâ€™s a garden without seeds? Victory gardens reflect the value in each tiny seed and prioritize using seeds as carefully as possible. Thickly planting seeds was called a â€śwasteful methodâ€ť unless they were seeds for something you could readily eat, such as salad greens. Plant carefully and according to the recommendations on the packet. Likewise, victory garden publications recommended saving seeds when possible.

Victory gardens focused on efficiency: maximum output for minimum input. Focus on staple crops that grow easily, provide dense nutrition and can be readily stored. In other words, plant what you know will succeed for your growing zone and you can easily manage.

Such a mindset addresses a key barrier first-time gardeners encounter: taking on too much, too soon.

â€śI recommend starting modestly and gradually expanding a home garden,â€ť comments Roger Doiron, a Maine-based home gardener and founder of Kitchen Gardeners International, a nonprofit organization dedicated to empowering people to achieve greater levels of food self-reliance through home gardening and cooking. â€śThe biggest mistake of first-time gardeners is planting beyond their abilities, which leads to frustration, particularly when a crop ripens and needs to be harvested and preserved all at once, such as beans.â€ť

Not surprisingly, it also yielded friendships and exchanging of tips and ideas. Community also took the form of shared gardens, particularly in urban centers, for people who lacked growing space to plant, weed and harvest together.

Such community-gardening spirit still proves beneficial today, particularly for those of us gardening in rural areas where we can sometimes feel isolated and lonely. Gather your gardening friends for a day of tomato-sauce canning.

Have everyone bring canning jars, lids, pots, tomatoes and other ingredients for their favorite sauce recipe. Establish task stations, such as washing and coring tomatoes, so the work can be divided up and efficiently accomplished.

As the sauce simmers and water baths boil, conversations and connections bloom.

Is your farm near a town where some folks might not have access to a garden plot? This population includes apartment dwellers or those with backyards that might be too shaded or wooded for gardening. Create your own version of a community garden by offering to share space, work and the harvest from your land.