Cute-looking Vietnamese Potbelly pigs can make fun pets, but care must be taken when decided to welcome these petite porcines into your home. 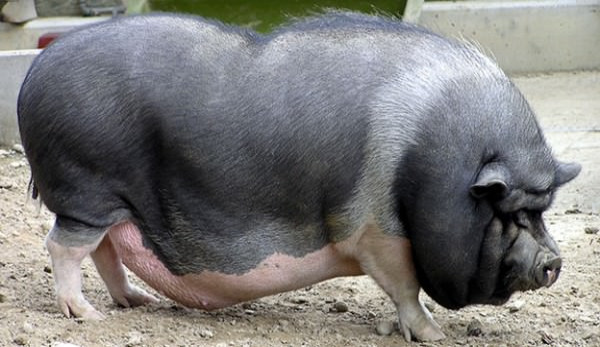 Use: Also known simply as pot belly pigs, Vietnamese Potbelly pigs are a dwarf swine breed, originally bred to be zoo animals. They are now most commonly used as domestic pets.

History: Potbelly pigs were developed in Vietnam and brought later to Canada, where the first breeders originally intended to offer them as zoo animals. Not long after they got their start, it was thought the small-sized pigs would make good pets, an idea which soon became widely popular. In 1986, when the first potbellies were sold into the United States, their market price ran well into the thousands of dollars. As the prices of the pigs became more affordable, they became more accessible alternative pets to cats, dogs and other typical household pets.

Conformation: Full-grown potbellied pigs weigh an average of 70 to 150 pounds with some reaching 200 pounds or more (typical domestic swine can weigh as much as 600 to 1500 pounds). Potbellied pigs average 3 feet in length and 15 inches in height. They’ll reach full growth by about age 5. Colors range from solid black to solid white, with a variety of spots in between.

Special Considerations/Notes: Most people who purchase these pigs want them as pets, but these pigs do not necessarily stay small. Potbellied pigs tend not to enjoy being picked up or held. (Unlike cats and dogs, pigs are prey not predators, so being lifted up or restrained causes them extreme alarm.) If keeping the animals as pets, owners will want to spay or neuter the potbelly pig. Unspayed females will display strong mood swings and intact males produce a pungent odor and other undesirable traits. A neutered male is called a “barrow,” an intact male is a “boar,” a female that has never had babies is called a “gilt” and a female that has given birth is a “sow.”