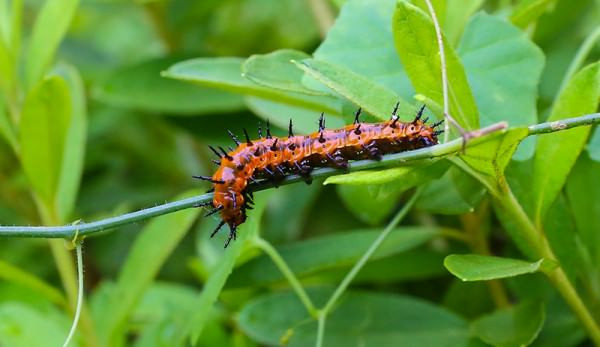 I spotted a fearsome caterpillar on a hedge alongside in my garden several weeks ago. The caterpillar was a shockingly vivid hue of orange and the bright body was covered with a field of treacherous branching black spines. At first glance, I knew that I wanted to have no dealings with this creature. That is exactly what the gulf fritillary caterpillar intends with its terrifying appearance that attempts to announce to would-be predators that it would make for a toxic meal and is better left alone.

In actuality it is all smoke and mirrors. The poisonous-looking orange color of the caterpillar is just a false warning and the black jagged spines are actually rather soft to the touch and have no stinging ability. This visual deterrence strategy unleased by this caterpillar was as effective on me as it is on birds, lizards and other creature that prey on caterpillars. This particular caterpillar will go through its metamorphosis stage and finally emerge as a large stunningly beautiful orange butterfly with dark markings and wingspan that ranges between 2½ and 3½ inches. The gulf fritillary has a wide territorial range and is found coast to coast in the southern half of the United States, extending well south into Mexico.

The best news is that this particular caterpillar has no interest in consuming any edible plants in your garden. Gulf fritillary larva only feed on narrow set of vines all in the passionflower family (both ornamental and native species). This species is one of the few caterpillars that has adapted to be able to feed on the poisonous passionflower vegetation, giving it a unique environmental niche.