Valerie Wallis from the Indiana-based Wallis Farm gets into her favorite cattle tips and shares techniques for spreading bedding. 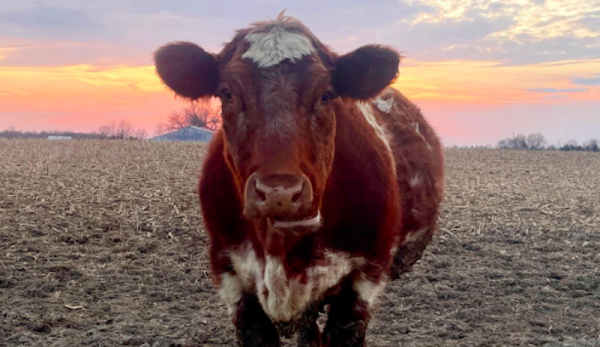 “Raising cows is an everyday job,” says Valerie Wallis, who runs the namesake Wallis Farm alongside her husband, Shane Wallis, in Indiana.

Specializing in Shorthorn cattle, Wallis adds that ensuring the welfare of their animals has always been paramount. “We look at their bodies daily to make sure they are feeling okay and don’t have issues with their hooves walking or sores from something random,” she explains.

Part of this process involves taking daily walks around the pasture to check on the cowsâ€”and it’s a routine that’s become one of Wallis’s favorite parts of the day.

Taking a moment out from cattle duties, we spoke to Wallis about learning to love cows and tips for spreading bedding. We also got the inside story on the farm’s star cow, Esther.

The Roots of Wallis Farm

Wallis Farm furthers a family farming legacy. “Shane grew up watching his grandfather farm,” says Wallis. “His grandpa had 40 head of cattle, and he harvested corn and beans in Indiana.”

After buying the farm off Shane’s grandparents, the Wallis’s have built up to 30 head of their own Shorthorn cattle. “We also harvest corn, beans and hay for the cows,” explains Wallis.

All About Cow Love

The Shorthorn focus of Wallis Farm comes from Shane’s days taking part in the 4-H youth organization network. “He found out that his heart belonged to the cows,” says Wallis. “He has raised cows since he was in high school.”

After they started dating, Wallis’s own love for cows began to grow as she watched Shane raise them. “We have had our share of adventures, from them getting out to showing them at beef congress to bottle feeding ones that needed help,” she says.

A recent post to the Wallis Farm Instagram account dug into different ways to spread bedding for cows. Using either straw or baled corn stalks, Wallis explains how “the easiest way to spread a round bale is with the skid loader or even the manure spreaderâ€”but with straw instead of poop.”

When tackling square bales, Wallis says her top hack is to “bash a few handfuls of the straw together like you are clapping and let it scatter across the pen.” For added amusement, Wallis recommends playing music and kicking the straw around in time to the song.

Read more: When cold approaches, you need to get things ready to keep cattle safe.

Esther the cow is one of the main draws at Wallis Farm. Her back story involves being born as a twin but having her mother reject her in favor of her brother.

“I had to bottle feed her from day one, and we got close because of that,” says Wallis.

It turns out that Esther was also born a free-martin. “So long story shortâ€”and skipping a bunch of medical termsâ€”Esther cannot have babies,” says Wallis. “I cannot have kids either, so it bonded us even more.”

When it comes to running a family farm, Wallis says that she gets the most amount of joy out of “watching everything grow and being able to say I did that.” She adds that her husband is proud to be carrying on his grandfather’s legacyâ€”and that they both value the sheer hard work that goes into making sure the farm keeps ticking along.

“We absolutely love it and would have it no other way.”