Want to Scale Up Your Flock? Make Room in the Coop

If the urge to add more chickens to your flock strikes this spring, be sure your coop is prepared to accommodate the extra bodies. 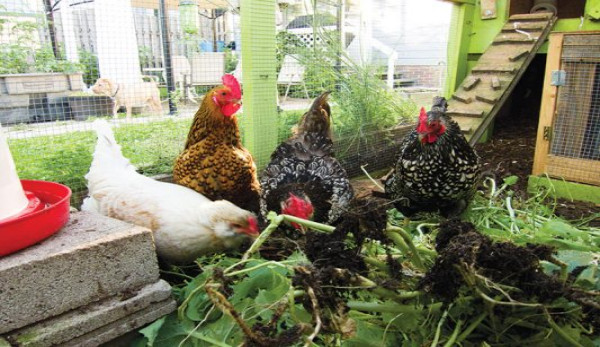 Anyone who has kept chickens for even a day knows the urge to add more birds to the existing flock. This urge is commonly referred to as “Chicken Math,â€ť and it peaks in early spring when adorable baby chicks begin arriving in feed stores.

The desire to add different breeds and feather patterns to your flock and a rainbow of eggshell colors to an egg basket all contribute to this formidable force, and the only compelling constraint is available space. The space inside a chicken coop determines the maximum number of chickens that can be responsibly housed in it. However, with a little creativity, itâ€™s possible to expand your flock without hiring a contractor to build an in-law apartment onto the existing coop, all while providing your birds with enough room to lead happy, healthy lives.

When calculating how many chickens can be housed comfortably inside a coop, the rule of thumb is 4 square feet of space per full-sized bird. Outside the coop, 10 square feet per full-sized bird is advised. A number of variables allow some flexibility within those parameters, but avoiding overcrowding must be the priority.

Crowding chickens into a coop presents many dangers. Chickens explore their world with their beaks, and the closer they are to one another, the more likely they are to explore one another by pecking. One chicken investigating an emerging pin feather, an insect or a fleck of food on a neighborâ€™s body can result in a minor skin wound that risks becoming a life-threatening injury. Crowded chickens may begin pecking one another aggressively to enforce their places in the flockâ€™s social hierarchy. Bearing in mind the known repercussions of overcrowding, there are several ways to add flock members to an existing coop responsibly.

1. Scale Up by Downsizing

Because bantam chickens are much smaller than full-sized birds, they require approximately half the space required by their larger flock mates. Acquiring bantam chickens provides a two-for-one Chicken Math opportunity.

If nest boxes are at floor level, they can be raised and wall-mounted to free up valuable floor space inside the coop.

3. Raise Roosts & Add a Droppings Board

Roosts can also be wall-mounted inside the coop versus a ladder-type roost system that attaches to the floor. Adding a suspended droppings board beneath the roosts creates clean, usable floor space. Adding suspended roosts outside the coop also adds vertical space in the run and gives birds a refuge when needed.

If feasible, move feeders and waterers out of the coop into the run. Not only will this free up floor space inside the coop, it will reduce the risk of attracting rodents to the coop while keeping the litter drier and healthier when chickens are confined inside. Utilizing a wall-mounted, PVC, poultry-nipple watering and feeding system maximizes available run space. Supplying multiple feeders and water stations will minimize the risk of disputes over access to them at any given timeâ€”just make sure access isnâ€™t cut off between the run and coop.

If moving the feeders out into the run is not a viable option, employing wall-mounted feeders instead of hanging or free-standing feeders will accomplish the same objective. Likewise, with the waterers, a wall-mounted, poultry-nipple waterer will open up square footage that free-standing waterers had occupied.

The variable that grants the most flexibility in adding to your flock is the amount of outdoor space available to the chickens. Flocks that freely roam outside any enclosure require a great deal less space inside the coop and run than flocks that are confined to them. Free-range chickens ordinarily spend very little time inside the coopâ€”they will enter the coop to lay eggs and to roost at night, but the majority of their time is spent outside foraging. There are times, such as during inclement weather, when even free-range chickens will not have access to open space and the run then becomes the most important space available to the flock.

The bigger the outdoor enclosure, the greater opportunity chickens have to relax and enjoy their personal space without worrying about defending their position in the pecking order. A covered run provides protection from the beating sun in hot weather, as well as an opportunity for chickens to get out of the coop during cold, rainy, snowy or otherwise lousy weather.

Itâ€™s OK to give into that urge to add to the flock. But if you up your bird count this spring, make adjustments in your coop first to ensure it can handle the load.