Waste Not, Want Not

Photo by Judith Hausman With a little bit of work, vegetables that would have otherwise gone to waste can be transformed into sauces, soups and salads. Today, as part of my work in our garden coop, I joined my buddies to survey our harvest shelves. When necessary, we stockpile produce in a cool basement where there’s […] 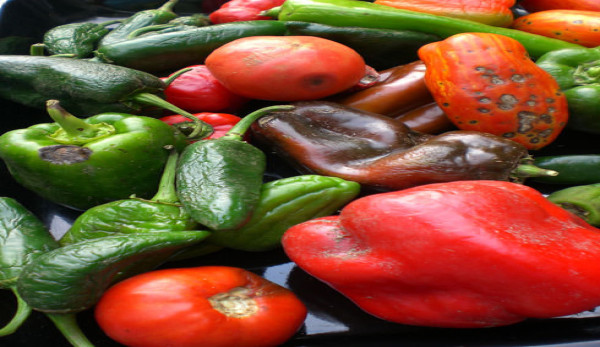 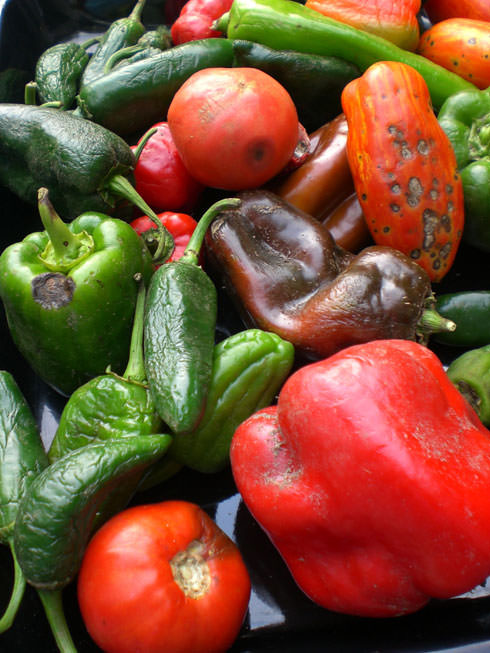 With a little bit of work, vegetables that would have otherwise gone to waste can be transformed into sauces, soups and salads.

Today, as part of my work in our garden coop, I joined my buddies to survey our harvest shelves. When necessary, we stockpile produce in a cool basement where there’s also a fridge for storage. The recent tropical storm had chewed up many crops prematurely, and the ongoing dampness has invited insects and mildew, too. Nonetheless, we have so much that our stored vegetables needed culling.

Oh so sad: slimy okra, oozing tomatoes, wrinkled peppers and spotted green beans. Their glossy, ripe skin was now fit only for compost. It should be a small comfort that they’ll become great soil, but it really gets to me to see waste like that. In fact, we are already re-thinking next year’s crops to minimize waste.

I declared myself the home and mother for the orphaned, wilted vegetables. I just kept saying, “I’ll take it,” when my mates held up a bag of beans that had been picked late and had gotten a little lumpy, a yellow-striped tomato with one side covered with black spots, and a tray of small broccoli florets that had wilted. It became my mission to give these vegetables their moment to shine as a wonderful sauce or to be tucked away in a frozen medley of odds and ends that will taste so good in January.

It isn’t vegetable masochism; I wouldn’t eat a pepper with black fuzz growing inside. I certainly helped myself to our brand-new, quite-delayed eggplants: a squat, striped one; a plump, purple one; and an egg-white one. But if I didn’t take responsibility for the less-than-fresh vegetables we had, they would have sat like a doggie in the window for two or three more days and then become inedible, ending up at the beginning of the long cycle back to becoming food again.

So what do I do with the orphaned vegetables? The easiest thing to do is to cut them up, cook them and freeze them all. This can result in instant minestrone in February, using the packets as a base. This time though, I think I’ll roast a big tray of picked-over mixed peppers. I can then either freeze them as-is, whir them into a chunky sauce or soup base, or pickle them. Cooked, they’ll hold while I decide. There are similar options for the broccoli, but I’ll likely combine some with cooked grain (quinoa? brown rice?) and some cheese for a simple, hippie dinner as well.

I’ll pickle (more) dilly beans using the volunteer dill heads we have in the garden and the oily garlic cloves we’ve already dried. When I steam the beans and add some chick peas, red peppers and a red onion, they’ll become a two- (or three) bean salad that’s light years better than the ones from the deli. The summer squash that’s getting soft will be grated into moist muffins. I’ll peel and scoop the seeds out of the large cukes, and then salt, drain and rinse them to make a sort of faux Japanese salad with a rice-vinegar dressing.

The tomatoes really need trimming; maybe they’ll become chopped salad to fill the fish tacos I’ve planned for Friday or companions to the gorgeous eggplant in a vaguely Middle Eastern spread or salad.

I can make the marginal vegetables shine, and I love the transformation that a little extra work can yield.